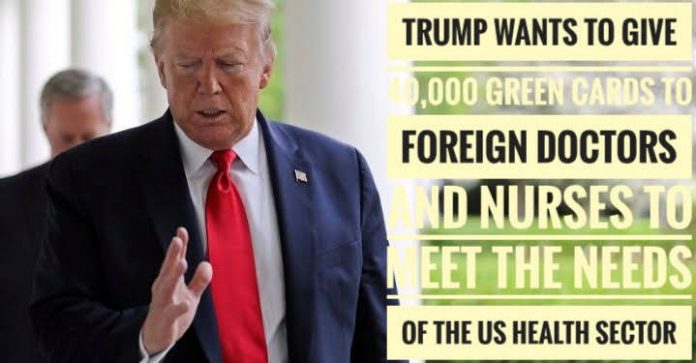 Amid the covid-19 pandemic, the president of the United States, Donald Trump wants to give 40,000 green cards to foreign doctors and nurses to meet up with the needs of the US sector. The US currently has about 1,284,000 confirmed coronavirus cases and about 77,000 deaths already. The legislation is willing to send green cards to 15,000 doctors and 25,000 nurses during these covid-19 times to make sure that the needs of their health security are met. The legislation which was introduced by American lawmakers permits them to give permanent legal residency status to thousands of foreign doctors and nurses. According to reports, the legislation is likely to benefit Indian doctors and nurses who are either on J2 visas or H-1B. The green cards to be given out were already approved by congress but has been unused in the past years.

The Healthcare Workforce Resilience Act could allow the recapturing of these green cards to allow medical professionals to serve. The congress had set hard numerous caps for most immigrant visas since 1921. Reports say that at July 2019 25,294,990 immigrant visas had been allocated by congress but only 20,567,754 of them were used. The bill is sponsored by the senators gives visas to these foreign medical professionals without requiring them to treat it take care of the covid19 patients. The recaptured visas are available to all doctors and nurses who already filed for an immigration visa petition. The HWRA requires employers to attest that these immigrants receiving the visas will not displace any American worker.