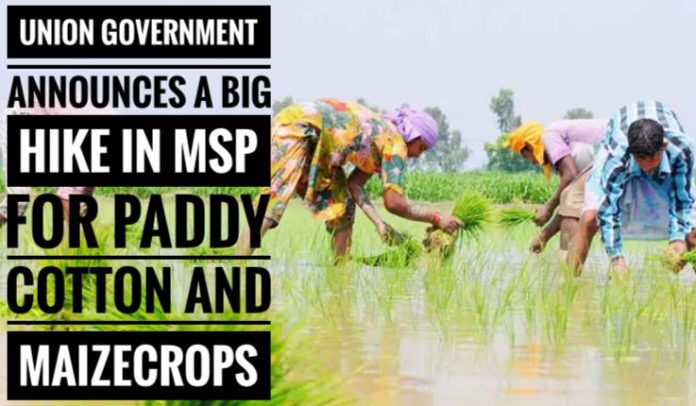 To help the farmers in crop distress and give them 50%of the input costs to the farmers, the Union government has decided to raise the minimum support price of crops. But it can also increase the market inflation.

The biggest increment is for rough grains planted mostly in non irrigated areas by the poor farmers a quarter of India’s area having the plantation of such crops is in Rajasthan majorly and the other areas like Uttar Pradesh. Maharashtra, Karnataka, Madhya Pradesh, Odisha and Andhra Pradesh.

The promise made in this year’s budget that the MSP will be determined on the cost of harvest thus getting farmers 150% of their cost in production by the move of 15,000 crores was fulfilled.

Arun Jaitley said in his budget speech that the provisions that were made earlier for a subsidiary of food were enough to absorb the cost without altering the fiscal deficit.

MSP of paddy increased by 65 per quintal, johar by 120, and Ragi by 253 per quintal. This will give a major boost to the income of the farmers as decided by the meeting held under the chairmanship of prime minister Narendra Modi thus increasing the MSP of Kharif crops for the year 2019-2020. The MSP for soybean has been raised to Rs 311 per quintal, 262 for sunflower, and 236 for sesamum per quintal. Tur dal has been increased to 125 per quintal ad 100 for urad dal per quintal that will touch on the issue of pulses among the farmers and to meet the needs of nutritional security and protein requirements for the nation itself.

The move is due to the backdrop for the need to promote the cultivation and consumption of nutrient cereals in the country and to help the poor farmers and FCI have said to provide support to the poor farmers along with other designated agencies. For medium staples of the cotton crop, the MSP has hiked to 105 rs per quintal and 100 per quintal respectively and the highest percentage return is for Bajra which is 85%, urad is 64% and for tur dal, it is 60%.

Central agencies like NAFED, SFAC, and other such agencies have said to undertake the procurement of oilseed and pulses and for the support of price in cotton, CCI will be nodal agency in charge. the efforts of CCI for cotton supplement will be supplied by NAFED. It has been said that if any losses are encountered those will be reimbursed by the government itself.