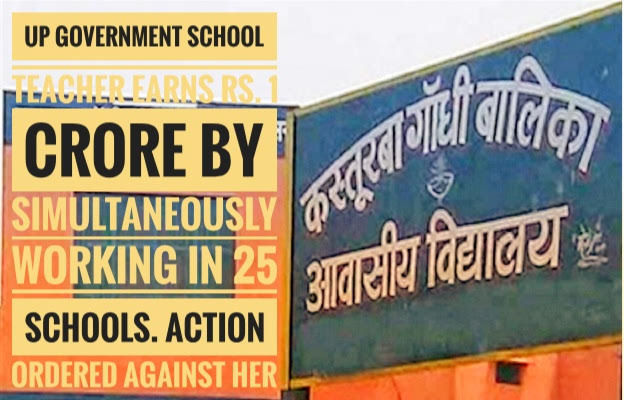 The KGBV (Kasturba Gandhi Balika Vidyalaya) is a program of the state Basic Education Department for the promotion of Girl Education. The teachers are employed on a contract basis. The salary pay for each is Rs. 30,000.

Recently, the department started digitalizing databases of the teachers employed across the state. This process uncovered the news that this particular teacher, Anamika Shukla has been employed at 25 different schools over the state.

And through this, she has drawn a salary of Rs. 1 Crore, over a span of 13 months. As the databases were digitalized, this matter was brought to light. A probe has been ordered against the teacher.

The teacher was found to be a native of the Mainpuri district as per the records. She was found employed at 25 schools simultaneously. On records, being a full-time teacher in KGBV, she was registered as a teacher in Amethi, Ambedkarnagar, Raebareli, Prayagraj, Aligarh, and some other districts.

There are accusations that she has worked as a science teacher in Kasturba Gandhi Balika Vidyalaya in Ambedkar
Nagar, Baghpat, Aligarh, Saharanpur, Prayagraj and other places.

Till February this year, she has drawn a salary around Rs. 1 Crore.

The teacher has not responded yet, despite the notice from the department. Her salary has been withheld with immediate effect. Additionally, the Education Department is trying to find out if the same bank account was used for salary transfers from other schools.

The Government led by Yogi Adityanath has reported that nothing has been confirmed yet. A probe is in place, and if it is found to be true, an FIR will be logged. Any other teacher, if found working as a proxy teacher in other schools, will be subject to strict action, they said.