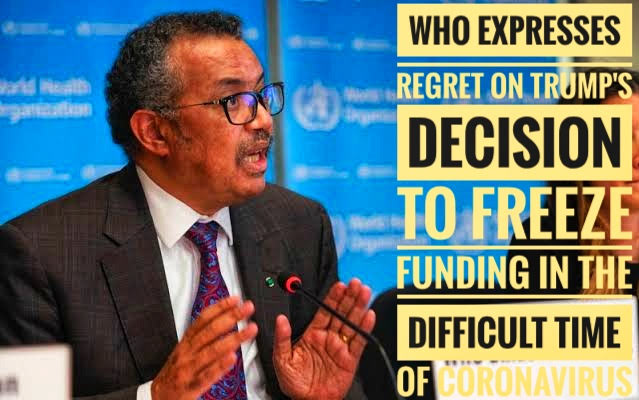 On Tuesday, in a white house briefing the President of the United States of America, Donald Trump said he instructed his administration to withhold its funding for the World Health Organization, he said that the Geneva based organization is mismanaging and covering up the spread of the deadly virus. The president also added that the fund will be frozen for about 60 to 90 days. In Mr. Trump’s speech he said his country gives about $400 million to the organization and accused the organization of being too lenient on China because the outbreak emerged there first. In a pressure conference, the Director General of the WHO Tedros Ghebreyesus said “We regret the decision of the president of the United States to order a halt in funding the World Health Organization”, while adding that it is with support from the people that the organization try’s to help poor and vulnerable people.

The Director General of the organization also added that it is currently trying to fill in the gaps with the help of other partners and is reviewing the impact of their work. Mr. Trump also said that China donates only $40 million to the WHO despite the country being where the virus originated. Director General Tedros also added that “The United States of America has been a long standing and generous friend of the WHO”. Mr. Trump accused the WHO of failures and have decided to conduct a unilateral review of the World Health Organization global crisis before making a decision as to whether to resume its funding or not. The number of coronavirus cases globally have reached 2 million. The United States has very high cases of the pandemic recording about 29,215 deaths and 652,996 infections.

The US president also accused the WHO of cover ups and missteps and failing in its basic duty as well as failing American tax payers who fund the organization. The US is one of the organization’s top contributor besides the Melinda Gates foundation. Philanthropists like Michael Bloomberg and Bill Gates insisted that the WHO should not be cut off such funding at this critical time.