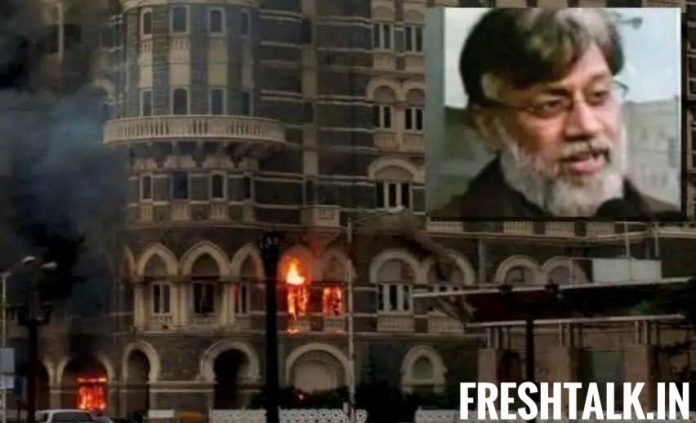 The most accused in 26/11 Mumbai terror attacks, Tahawwur Hussain Rana, had been arrested by the US government from Los Angeles.

Tahawwur Rana is an accused by the Indian government and has been trying to bring him back to India from the USA. Tahawwur Rana, who is in US prison for the past 10 years for providing material support to Pakistani terrorist groups. He was released from Terminal Island Prison in Southern California as he had filed an application to government that he had tested positive for Covid-19, this is almost one and half years before his jail term would end. The USA authorities placed him in jail on charges that he was facing extradition from India in a terror case which is related to the Mumbai attack.

Sources have learnt that the Indian government is keeping interested in the developments and will push for early release and will be sent to India to Rana to face trial in India.

Almost 160 people, including foreigner’s, died during the Mumbai terror attack which happened and executed by ten LeT terrorists. The security forces had killed nine of the terrorists, whereas Ajmal Kasab who was one of the terrorists caught by the Mumbai Police and later hanged in the Yerawada Central Prison, Pune on November 21, 2012.

Sources have told that India has completed the documentation formalities in the US authorities for smooth extradition of Rana and evidence regarding the case against Rana has been shared with them by India.

The National Investigation Agency (NIA) team had gone to the USA on December 13, 2018, to discuss the matter with American authorities
Sources as learnt that as Rana has been charged for sending material support to LeT by the US court, the Indian investigative agencies have sought his extradition on the ground that he was terrorist of LeT and was part of a terror plot to attack Delhi-based National Defence College and Chabad Houses.

Rana was caught in Chicago where he was a travel agent and it is suspected that David Coleman Headley was using this business as a way to cooperate for terrorist activities and transport weapons.

Rana’s lawyer said he had been kept under pressure by his high school friend Headley, a terrorist who had accepted that he had plotted the Mumbai attacks. The defence called Headley a habitual liar and manipulator.

Rana was arrested as of allowing Headley to open a branch of his Chicago-based immigration law business in Mumbai as a cover story and travel as a representative of the company in Denmark.

The lawyers said that Rana knew Headley had trained as a terrorist. Headley shared information of his missions he conducted in Mumbai and of the Taj Mahal Palace hotel, where a bomb blast had later slaughtered dozens of people in India.