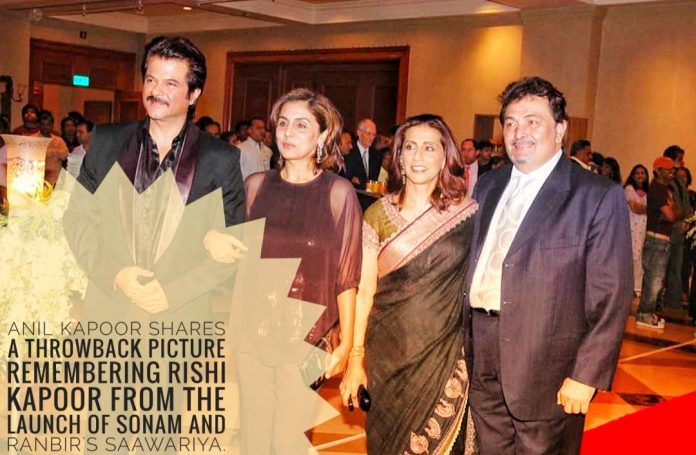 Remembering late Rishi Kapoor, Anil Kapoor shared a throwback picture with him. The picture he shared is from the launch of Sonam Kapoor and Ranbir Kapoor’s film Saawariya.

With the pandemic situation of coronavirus, the year 2020 is bad for Bollywood industry also, since, in the last of April, the Industry lost their two great Actors.

On 29 April, The Industry lost the most energetic, extraordinary & Inspiring actor Irfan khan who died due to Brain cancer(neuroendocrine tumour) and next day on 30th April the legend and super Actor Rishi Kapoor died because of leukaemia is also a type of cancer.

The whole Bollywood industry is in grief yet, Today Anil Kapoor shared the picture of Rishi Kapoor on Instagram.
The photo is taken from the launch of the film Saawariya in which Ranbir Kapoor and Sonam Kapoor played the lead role.

With sharing his photo, Anil Kapoor writes,’Remembering James….
Sharing the launch of Sonam and Ranbir’s careers with Neetu and rishi is one of the happiest memories of my life….
The photos which Anik Kapoor shared shows how energetic, happy and charming person Rishi Kapoor was.
In the photos, There are Ranbir Kapoor, Sonam Kapoor, Neetu Kapoor, Anil Kapoor and his wife Sunita Kapoor.

The film saawariya was released on 9 november 2007 directed by sanjay leela bhasali.