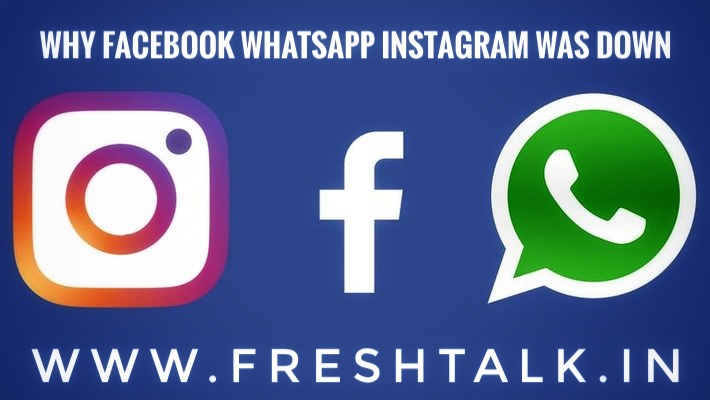 Facebook, Instagram, Whatsapp are the most downloaded apps on Play Store. There are 1 Billion+ user who use these apps for sharing photos and communication. But for any reason Facebook, Whatsapp, Instagram was down for 9 hours. So i am going to tell you why was these big apps was down.

This is the third time in this year Whatsapp, Facebook, Instagram experiencing massive down. Last time in March , Facebook faced this issue because of server configuration change but this time its unclear what is the reason behind massive down.

#facebookdown #instagramdown #whatsappdown was trending on twitter. Facebook has confirmed by tweeting “we are aware that some people are having trouble uploading or sending images, videos and other files on our app. We are sorry for the trouble and are working to get things back to normal as quickly as possible.

Twitter Support also tweeted “We’re currently having some issues with DM delivery and notifications. We’re working on a fix and will follow up as soon as we have an update for you. Apologies for the inconvenience.”

1. People were not able to upload their status.
2. People were not able to download images.
3. People were not able to listen audio clips.
4. App was not responding in some devices.
5. Not able to send images, videos, audios.
As we all know big celebrities update on instagram stories on daily basis but they were not able to upload stories so they use others app like Snapchat to communicate with their fans.
When Instagram, Facebook and Whatsapp were all down on Wednesday some big celebrities like Colton Underwood tweeted on his twitter handle “he was frustrated about the temporary shutdown because he wanted to “show off” his new girlfriend Cassie Randolph. “Yo @instagram. I just went public with my girlfriend last night and i have to post a few more pictures of us to be annoying/show her off. Can you fix yourself soon?”
Mindly Kaling jokingly hoped the outage would increase her popularity on Twitter. ” Instagram and Facebook are down so here we are”, she wore “Crossing my fingers this is my best performing tweet yet.

Some interesting facts to know:

What is the income of Ashish Chanchlani?
What is the income of Dynamo Gaming?
What are the advantages and disadvantages of PUBG MOBILE?
Lindsay Lohan tweeted she’d been “hacked” and demanded “@instagram please contact me.”
Downdetector maps shows that this issue was not only faced in Asia but struggling around the globe and worse in East Coast and in Europe.