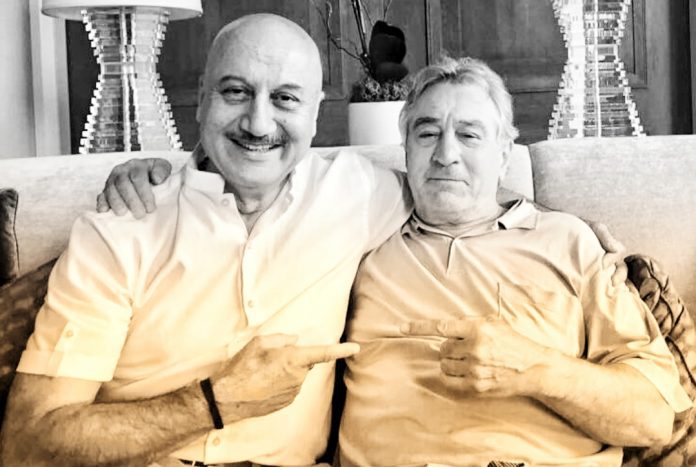 Anupam Kher’s new post is all about his most “ priceless possession”. Anupam Kher worked with Robert De Niro in 2012 movie Silver Linings Playbook, featuring Jennifer Lawrence and Bradley Cooper as leads Today he shared a picture with Robert De Niro and a caption revealing the story behind pic.

Anupam Kher on his Instagram posted a picture revealing his most priceless possession. In the picture with Anupam, there is Hollywood renowned actor Robert De Niro. He worked with him in 2012 since then he Anupam kept sharing memories with him, and today he did same. He shared a picture where both of them Anupam and Niro posing the same.

Anupam also tells about the history of taking that picture in the caption “Story of this pic: There won’t be a single actor in the world, aspiring or established, who won’t be an ardent fan of this phenomenal legendary actor #RobertDeNiro. As a drama school student, I had done a special paper on two of his earlier films Mean Streets and Taxi Driver.”

Anupam also said that it was a dream for him to work with Robert Niro, he mentioned that” Never in my wildest dreams had I ever thought way back in 1977 that one day I will get an opportunity of not only working with him in #SilverLiningPlaybook but will also have the good fortune of calling him, my friend”.

He than also share that “This picture was shot in his apartment in New York by photographer DavidORussellI, director of SLP.

The actor wrote a caption explaining how they both pose for this picture that “As always I had requested for a picture and as always he was obliging. At that moment I thought it will be cool to point my finger in appreciation towards the legend in the picture. And then in almost slow motion, I saw his hand going up and pointing his finger towards me in a similar manner. Miraculously David clicked the picture at that very moment. And I registered my name in the history with this pic. For me, this will always be my most priceless possession”.

This picture with Robert Di Niro and the story behind the picture very clearly shows how much this means to Anupam, the post gain a huge response from the fans