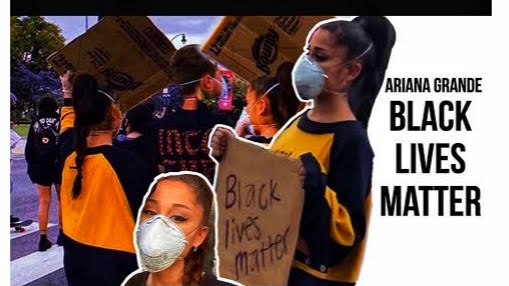 The death of George Floyd, an unarmed black man who was assaulted by a police officer has caused widespread violent unrest across the US and especially in Minneapolis.

The popular singer, Ariana Grande took part in the peaceful protest in Beverly Hills and West Hollywood along with her boyfriend, Dalton Gomez.

Some of her fans taken her videos and clicked some photos during the protest going on. Ariana Grande in which was seen wearing a baggy yellow and black sweater teamed with white sweatpants and beside this she was wearing a mask for maintaining safety and hygiene. Ariana Grande’s boyfriend, Dalton Gomez was seen holding a placard ‘Black lives matter’ during the protest.

“Hours and miles of the peaceful protesting yesterday that got little to no coverage. All throughout Beverly hills and west Hollywood we chanted, people beeped and cheered along. We were passionate, we were loud, we were loving.#BLACKLIVESMATTER .”