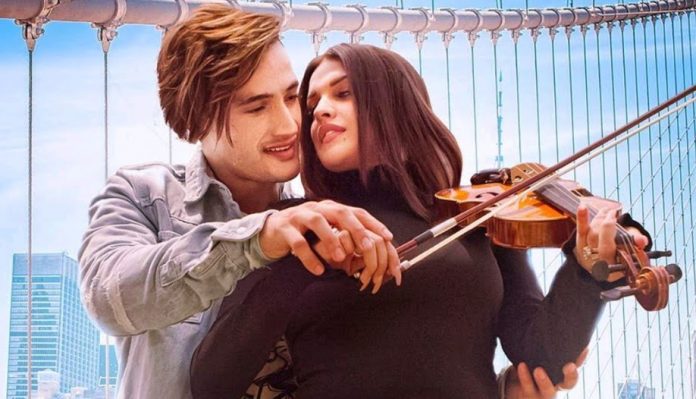 It’s a huge buzz for big boss 13 fame Asim Riaz‘s fans for he had shared a poster of his new song along with girlfriend Himanshi Khurana. Just a moment ago, he posted song Afsos Karoge in his Instagram handle. Both looked stunning as Asim was seen in casual tee, jacket and jeans, while Himanshi opted for a black tee and pants. All four of their songs are romantic. The song will be out tomorrow at 11 am. The singer is Stebin Ben, the lyricist is Sanjeev Chaturvedi and Yadu Brar is the director. This song is their fourth collaboration.

But recently, it looks his Asimanshi fans are not happy for including Himanshi in his new song or in future. The reason behind this? They think that Himanshi is getting work and recognition because of Asim. And she is the reason behind his unhappiness and is controlling him, calling her self-obsessed. They are trolling Himanshi because of this. Himanshi also replied a lot on these trolls saying, it’s not other’s business to look into their personal life. And even if she is getting good projects because of Asim, it shouldn’t bother anyone, because he is her man. Well following a lot of trolls, she had tweeted that this collaboration would be their last. And she would try to keep a distance from Asim and his projects.

He is an Indian model, known for his participation in Big Boss 13. Born on 13th July 1993, in Jammu, Jammu and Kashmir, he received his education from Delhi Public School in Jammu. He started his career as a model. In 2014, he worked for the company B’lue and after this e worked in many other companies. As his modelling career goes, he has been featured in many TV commercials like Blackberrys, B’lue, Numero, Uno, etc.

Born to a Punjabi family in Kiratpur Sahib, she works in Punjabi- language films.
She started her career in modelling in the year 2014, when she won Miss Ludhiana and she was also one of the finalists in Miss PTC Punjabi 2010. She made her debut in the Punjabi-music industry with the song “Jodi: Big Party Day). Her first Punjabi movie is Sada Haq which gained her a lot of fame. She also did a Bollywood movie called Jeet Lenge Jahaan and appeared in many South Indian movies. In November 2019, she participated in Bigg Boss 13.

So, from then Asim met her, and both started dating each other and has been a part of 4 romantic songs together, starting with Kalla Sohna Hain, Dil Ko Maine Di Kasam, Khayal Rakhiya Kar and this new song Afsos Karoge. Well, we hope both of them collaborate together in near future. He made his debut in TV as a participant in Bigg boss 13(2019).