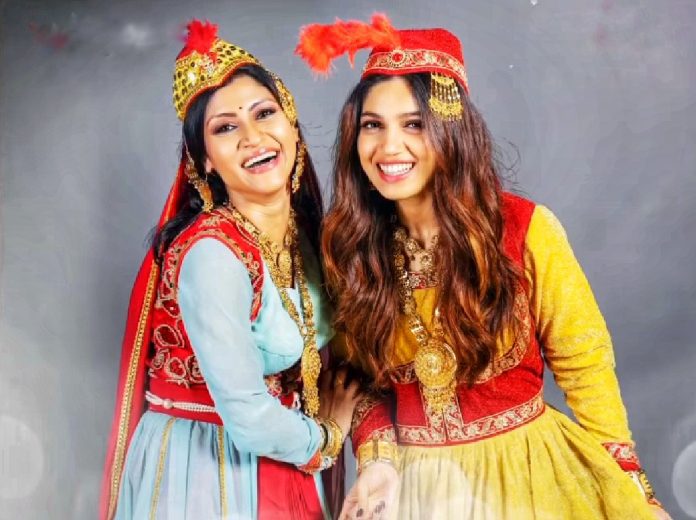 Dolly Kitty Aur Woh Chamakte Sitare will be soon out on Netflix starring Konkona Sensharma and Bhumi Pednekar leading the main roles. It has been revealed that this web series is been directed by Alankrita Shrivastava and produced by the Balaji Telefilms. Earlier, this series “Dolly Kitty Aur Woh Chamakte Sitare” was meant to be released on theatrical but because of the outbreak of the coronavirus now it will be shown on Netflix.

It has been seen that Bhumi Pednekar is very excited and make an announcement of this show on her social media account by posting a photo of herself with her co-star Konkona along with the caption, “Do watch Dolly and kitty fight their silent battles while they sail through their womanhood, sisterhood, love, and everything between in this charming story about finding freedom. Hence, can’t wait to shine with you my chamakta sitara.”

An outline of the plot of this movie is such that it has been set in a newly developing industrial area which lies on the edges of New Delhi, Dolly Kitty aur Woh Chamakte Sitare, a factual work describing a series of events about the quiet misdeed performed by two cousins (women), who through their complex love-hate equation, help each other to find freedom for themselves.” This series Dolly Kitty Aur Woh Chamakte Sitare which will be going to premiere also includes Vikrant Massey, Amol Parashar, and Aamir Bashir.

Initially, director Alankrita Shrivastava of this series had spoken with sources about the digital release of this series where the director itself told that there is quite enough scope for this movie if it gets released on the theatres. Regarding the Dolly Kitty Aur Woh Chamakte, Alankrita Shrivastava stated that “this movie has a lot to do with the theme of showing the lives of small-town people coming to big cities and trying their best to make it big. It is a little bit different take on the idea that freedom comes with a price.” Also, the director Alankrita makes a statement that she hopes Dolly Kitty will find its audience as I have put my blood, soul, and hard work in the making of this movie. Although it was well-received in festivals when it screened on, the rest entirely depends upon the audience.

It has been quoted that in the past several films have gone for an online release because the theatres will most likely remain closed for a while due to the safety concerns of the general public. As the discussion related to the online release of Dolly Kitty Aur Woh Chamakte Sitare was going on since May, as per the information received from the sources who later on disclosed the final details to an entertainment portal about releasing of this hilarious movie. Various digital platforms contacted the makers of the film, however, after holding several meetings it was finally decided that Netflix will be the one to showcase Dolly Kitty Aur Woh Chamakte Sitare.

As per the various entertainment portals, the film’s focal point is on feminism and encouraging women empowerment relatively. All the co-stars who have shown their talent in this upcoming movie are thrilled and very excited about the release of this movie and are eagerly waiting to find out how the film will turn out. This film Dolly Kitty Aur Woh Chamakte Sitare promises to break the old-fashioned idea just like Lipstick Under My Burkha. Poster of this film shows Konkona sporting in a bright pink saree whereas Bhumi is dressed in a thug look. Both of the actresses have their faces inside two different cages but that doesn’t hide them from showing their real identity. Figurative, the cage indicates the barriers which are been put by Indian society.