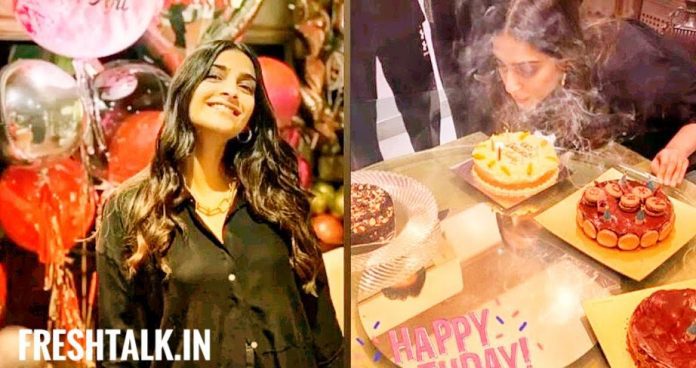 Celebrities like everyone else around the world is also been staying at the home and following the guidelines issued by the government to prevent themselves from the prevailing pandemic COVID -19 like following social distancing norms. A well-known actress Sonam Kapoor Ahuja who recently came back from London in the month of March is staying with her husband Anand Ahuja at their home in Delhi and also, she regularly keeps on sharing her daily activities with her fans through the Social Media. Sonam is keeping herself quite well during the lockdown period and also says that she misses Mumbai a lot.

It has been rightly said that there is nothing beautiful in this whole world then the bond of a sibling, only if you have got good ones. Otherwise, everyone is well aware that every day is like a wrestling match between the siblings but the bonding between the two sisters is more beautiful. The duo of two brothers having fun together is extremely rare but it is opposite in terms of two sisters as they support, care for each other and most importantly they love to do the crazy kinds of stuff altogether. Similarly, one such duo is of Sonam Kapoor Ahuja and her baby sister, Rhea Kapoor.

Both Rhea Kapoor and Sonam Kapoor Ahuja always find time for each other. Sonam is very close to her little sister, Rhea Kapoor and it is the reason why the little sister never hides anything from her. Birthdays are the most special occasions in everybody’s life and almost, everyone waits for an entire year to celebrate the most special day of their life with their loved ones. From getting surprises with a birthday cake at midnight to throwing a party with all their friends, also the family members ensure to make this special moment as the most remarkable one. How the birthday person waits for the clock to strike at 12 and see who is the first one to wish them on the special occasion as birthday brings in a lot of memories which everybody cherished throughout their lifetime.

Sonam Kapoor Ahuja especially flew down to Mumbai from Delhi on her special day and celebrated her late-night birthday with her closely related sister Rhea Kapoor along with other family members. Rhea Kapoor shared her birthday celebration pictures amid the coronavirus lockdown on Instagram. From cutting the cake to beautiful decorations with balloons. Rhea shared all the glimpse of her sister’s birthday celebration which includes cake cutting and video calling peeps. A huge balloon in the shape of the number “35” was also a part of the decorations which added charm to the house.

Rhea posted few pictures of Sonam Kapoor Ahuja’s birthday celebration in which it can be seen cutting one of her birthday cake while in other photos it shows Sonam Kapoor Ahuja show her smiling face admiring the decoration specially done to celebrate her quarantine birthday with her family members especially her closely knitted sister Rhea Kapoor. Even, the actress Sonam Kapoor along with her husband Anand Ahuja shared a few photos and videos which shows her spending time with her sister Rhea Kapoor at home. Even, Sonam Kapoor’s husband says that there is a strong bond of love and connection between both the sister’s i.e. Rhea Kapoor and Sonam Kapoor Ahuja and known to be as a most stylish sibling in the Bollywood industry and both of them had collaborated professionally too. It is very well known that the two siblings are extremely close to each other and share a lovely bond which cannot be described in the words as both of them love spending time with each other.