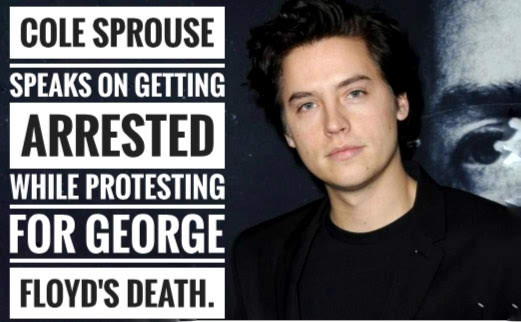 Riverdale actor Cole Sprouse is one of the many protestors who was detained by police for rallying for justice after the death of George Floyd’s.

In his Instagram post, Cole Sprouse revealed that he was detained over the weekend while rallying for justice in the death of Georrall lying.

After the death of an African- American man George Floyd in police custody in Minneapolis, on Monday, Hollywood has come together to show its support to the words, Black lives matter movement.

Riverdale actor Sprouse also took part in one such protest on 31st May in Santa Monica, California revealed that he was arrested while protesting peacefully.

The actor said that he was arrested with a group of fellow protesters who were targeted.

He wrote so before the horde of media sensationalism decides to turn it about me that I need to speak about the circumstances.

He said the media is by Nature only going to show the most sensational which only proves a long-standing racist agenda.

By sharing the post he wrote how he got arrested .he wrote in his Instagram post,” I was detained when standing in solidarity as were many of the final vanguards within Santa Monica.

We were given the opinion to leave and were informed that if we did not leave we would be arrested but when many did turn to leave, we found another line of police officers blocking our route and they started Zip-tying us.

Now the actor refused to speak more about the subject as he said, I’m

1.Not well versed enough to do so

2. Not the subject of the movement, and

3. An interested in running attention away from the leaders of the #BLM movement.

Cole Sprouse encouraged his followers to educate themselves about the Black live matter movement and donate and support the cause.