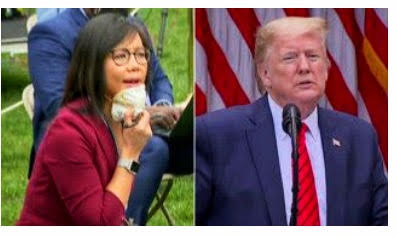 On Monday, Donald Trump the president of the United States of America quickly ended his White House news conference. The president got involved in a combative exchange with reporters named Weijia Jiang of CBS News and Kaitlan Collins of CNN.

Weijia Jiang had asked the president why he sees coronavirus testing as competition even after more than 80,000 Americans have died. In her question, she said “Why is this a global competition for you if everyday Americans are still losing their lives and we’re still seeing more cases every day?” also adding “Why does that matter?”

In response to her question, Mr Trump said “They are losing their lives everywhere in the world. And maybe that’s a question you should ask China. Don’t ask me. Ask China that question”.

After the president tried to move to another question Jiang kept insisting and even asked “Sir why are you saying that to me specifically?”, and in response, the president said he was not referring to her specifically but to anyone who will ask a nasty question.

When the president asked for another question then said “Nah, That’s ok”, and waved the reporter off but the reporter said “You pointed to me”, and he responded “I pointed to you and you didn’t respond”, she said “Can I ask a question”, and with that, the president called an end to the conference and walked away.

The United States has a total of 50 states and the president has been using the governors to reopen up the economy and end the quarantine. The president had also faced a lot of criticism after he suggested at some point that people should drink disinfectant as it could be a way of treating Covid-19 but later declared it as a joke.