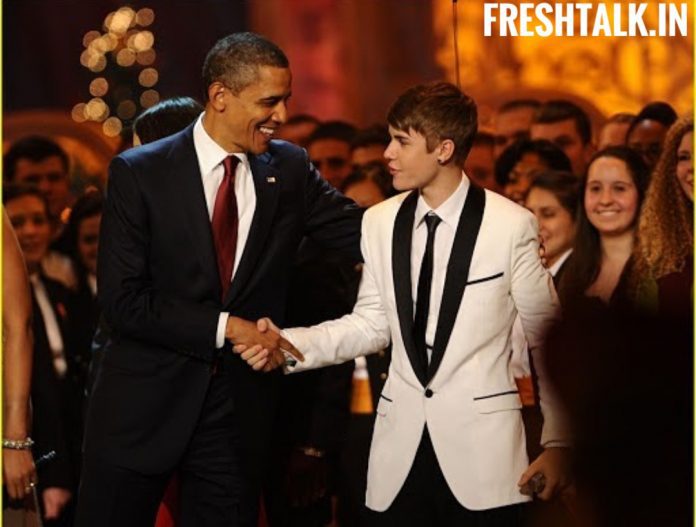 The picture shows the singer standing alongside former POTUS Barack Obama. The picture is a throwback from 2010 when President Barack Obama invited Justin to perform for him and his family at the Christmas in Washington concert at the National Building Museum.

With a total of 139 million followers on Instagram, the picture received over 19 lakh likes from his fans from all over the world in just 5 hours.

Both of them can be seen shaking each other’s hands while smiling for the camera. The fans are all gathered to show their support.

In an interview, when a girl asked President Obama if he knew who Justin Bieber was, he replied, “I do”, adding that Bieber is a “very nice young man,” This was in response to when Bieber had visited the White House in April 2010 to perform at the annual Easter Egg Roll.

With a string of hit singles from a quick succession of top-selling albums — Justin Bieber is the first artist to have five No. 1 records on the Billboard album chart before his 19th birthday — he quickly became one of the biggest pop stars and celebrities in the world.

The ‘Sorry’ singer recently took to Instagram to post that he has benefited a lot from ‘black culture’. He then gave a statement to clarify his point saying that he’s “committed to using his platform from this day forward to learn, to speak up about racial injustice and systemic oppression, and to identify ways to be a part of much-needed change.”

The Canadian pop star thanked his Indian fans for all their love for his new single ‘stuck with you’. The 26-year-old singer shared a video featuring some Indian music enthusiasts swooning and making their own music videos with the song playing in the background.

Bieber and American singer Ariana Grande teamed up for the song earlier this month to help the people affected and who are in need during the ongoing coronavirus crisis. The official music video also features the newlywed couple and some of their special moments
from the lockdown.