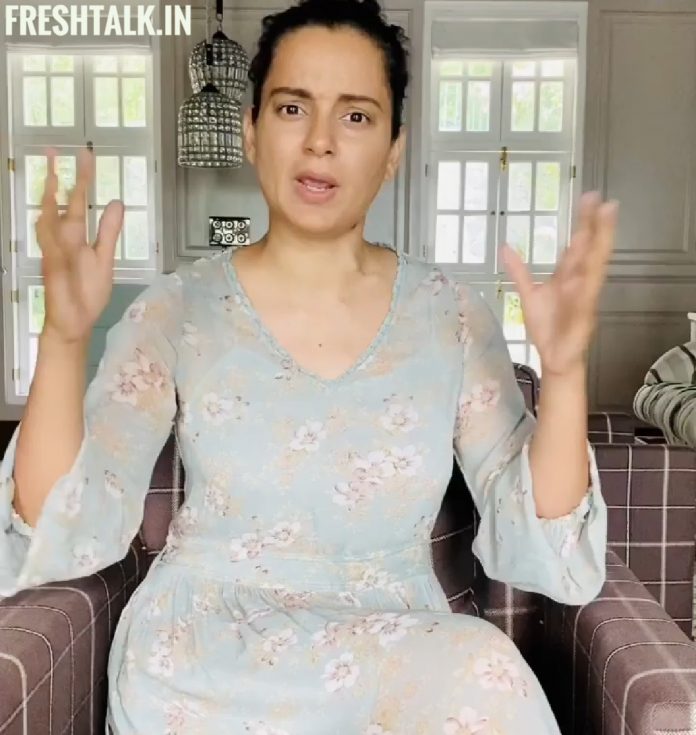 Sushant’s demise has once again triggered the conversation about nepotism in Bollywood, as the actor found dead in his flat on 14th june who left everyone in a huge shock.

Many Bollywood stars showed their condoles cense by tweeting and sharing pictures with Sushant Singh Rajput. While many have come and raised question on Sushant’s mental health.

She shared a video on her IGTV today where she is questioning the Bollywood’s failure on not identifying the talent just because of their Nepotism, lack of credits for his achievements. She is clearly asking the Bollywood for not giving him debut award for his wonderful movie – “ kai po che”.

She has been mourning on his tragic death as she questions Bollywood on not giving credits even to his good films like- M.S. Dhoni, Chhichore which is really an award taking a movie of Sushant. Without being afraid she spoke the bitter truth that how can a rank holder person of EEE(engineering entrance exam) be mentally weak.

Kangana Ranaut clearly saying the possible ways which forced Sushant to do the same. She is shaming the people by bravely asking “ Sanjay Dutta ka addiction to aapko cute lagta hai” and the one who was talented and have gone too soon, you were doing your blind journalism on him and saying that Sushant was addictive, neuroactive, worthless. And the only fault of Sushant was he accepted the same.

She appreciated the Sushant’s last movie Chhichore and spoke that the wonderful movie has not received any award and the one which was not so good movie – “Gully boy” received many awards.

She is asking that “ is this a plan murder or the death”.

The favour and unfavour quiz will go long but the saddest thing is this we just lost a gem who have gone too soon.