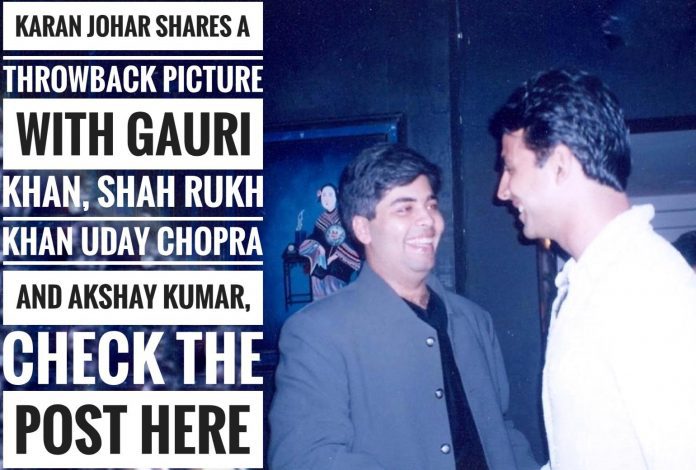 The popular Bollywood film director, Karan Johar, often informally referred to as KJo, is a producer, screenwriter, costume designer, actor and television personality who works in Hindi films. He is the son of Hiroo Johar and the producer Yash Johar.

Karan Johar is usually very active on social media. Recently, he shared 3 old pictures. In the first picture, it has been seen that it’s a group photograph where some of the famous personality is spotted like Uday Chopra, Gauri Khan and Shah Rukh Khan along with Karan Johar himself.

In the second picture, the Bollywood star non-other then Akshay Kumar and Karan Johar have been seen were smiling. In the last picture, it has been seen that Karan Johar is a seating and Udai Chopra standing just behind him and giving him ahead
massage.

Just after posting, the pictures go viral. Karan Johar captioned it as “ Major throwback¡ @ iamsrk@gaurikhan @udayc @akshaykumar”. Many celebrities along with fans dropped their love reactions and sweet comments. One of them is ‘ this is definitely a throwback’.