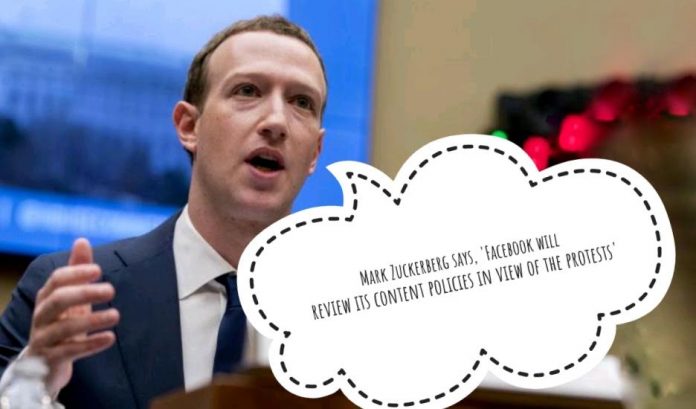 Public’s major revolt over Mark Zuckerberg’s statement on leaving President Trump’s inflammatory post as it is, led him to re-evaluate the policies of Facebook.

President Donald Trump made a Facebook post last week which clearly states the line “when the looting starts, the shooting starts”, referring to the protests over the death of George Floyd, the black man from Minneapolis who was purportedly murdered by police officers.

As you might know, this phrase has a racially charged history behind it which dates back to the civil rights era. The public took this tweet as a form of threat for the national guards to shoot the citizens over the revolt.

Twitter took a phenomenal step against this enraging tweet by limiting the public’s ability to view it and putting warning labels after fact-checking and labelling it as “glorifying violence”. On the other hand, Snapchat stopped promoting the president’s account on it’s discover panel.

Meanwhile, the CEO of Facebook refused to take any action against this issue that’s misleading the people and sending antagonizing messages. He even dismissed the fact that Trump’s post violates any guidelines of Facebook. Hence, he has been broadly criticised over his decision.

Later on, he expressed himself “In general, I worry that this approach has a risk of leading us to editorialize on the content we don’t like even if it doesn’t violate our policies, so I think we need to proceed very carefully.”

He admitted finding the post very unpleasant but whatsoever didn’t consider it necessary enough to be put down immediately, leaving for the public to view something this revolting.

This decision of his raised outbreaks even inside the company causing a number of employees laying out virtual resignation publicly, disagreeing with the CEO’s leadership.

“The hateful rhetoric advocating violence against black demonstrators by the US President does not warrant defence under the guise of freedom of expression,” one Facebook employee wrote according to a copy of the text viewed by The New York Times.

The employee further added, “Along with Black employees in the company, and all persons with a moral conscience, I am calling for Mark to immediately take down the President’s post advocating violence, murder and imminent threat against Black people.”

Zuckerberg hence reached the decision of considering changing the policies of the social networking site, labelling the posts, if in case it violates the guidelines. A more positive and thoughtful approach than the company’s current policies.