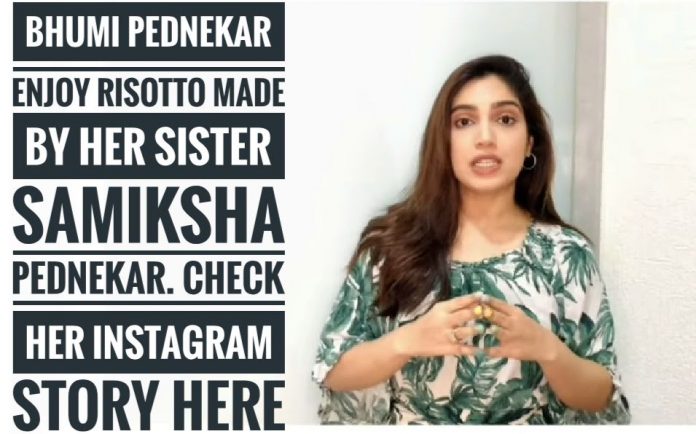 Bhumi Pednekar is a Bollywood actress. She was born in Bombay. She worked as an assistant director in Yash Raj Film company under Shanoo Sharma for six years. She won Filmfare award for best debut female actress. She also earned a lot of awards like screen award, zee cine award, stardust award etc., She also acts on her own web series.

Due to Covid19, the whole country is in the lockdown condition. Due to this condition all people like normal people, film actors, sportspeople etc., are locked in their home. To spend the time usefully all are trying something new in their quarantine. Likewise, Bhumi Pednekar also spends her time in a various manner.

Spending her time in social media :

She is very active in her social pages like Instagram etc. She shares her workout posts on her social media page. She started to spend her time cooking. Every day she posts her cooked recipe on her Instagram page. In this lockdown, she loves to spend her time cooking. She enjoys it a lot. She sharing her workout tips with her followers. Recently she Interacts with her little climate warriors about the environment. She posted it on her social media page also. She is not only an actress and also a good climate activist. She started an initiative called climate warrior. That appreciates the people who are working towards climate change. She started a campaign called “One wish for the earth. That was really a great startup among the people. That was an appreciated one.