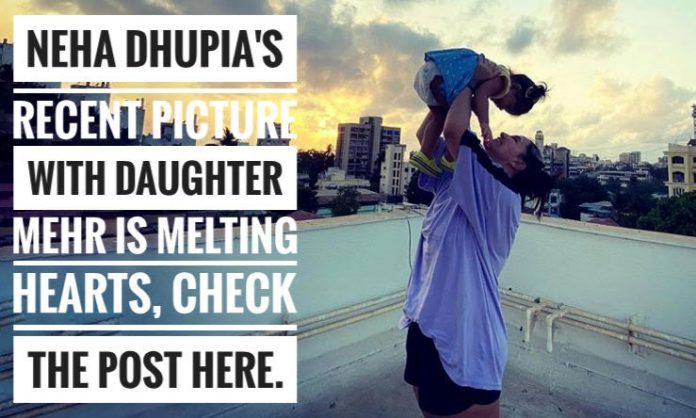 Bollywood actress, Neha Dhupia shared a moment from her motherhood diaries on her Instagram profile on Monday morning and the Internet loved it. The actress posted an adorable picture of herself along with her daughter Mehr Dhupia Bedi.

In the picture posted, she can be seen playing with her daughter on an open terrace. The photograph captured the beautiful moment between Neha and Mehr with the beautiful Mumbai skyline in the backdrop.

In the picture posted, Neha Dhupia can be seen wearing an oversized T-shirt with a pair of black shorts. Her hair has been put up in a bun. Mehr can be seen wearing a cute little blue dress as she is being held in the air. The sun can be seen rising in the background while grey clouds cover the Mumbai sky. Both of them seem extremely happy.

Along with the picture, Naha wrote, “ FLY …”. The one-word caption is enough to describe how Neha Dhupia wants her daughter’s future to be. She wants her to soar and reach new heights.

Neha Dhupia has lately been keeping her fans and followers entertained through the lockdown by posting numerous pictures and videos on her social media. She has been spending some quality time with husband Angadh Bedi and daughter Mehr Dhupia Bedi.