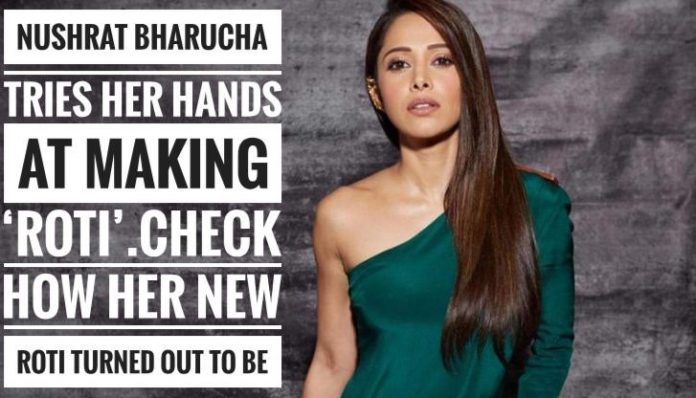 Its quarantine and all the actors are taking up new skills and hobbies and entertaining and encouraging their fans to try on. Most of them have indulged themselves in cooking and making delicious meals for themselves as well as their loved ones. But it’s not always you get success in cooking; one of the actors who did get much success in cooking is Nushrat Bharucha. The ‘Pyar ka panchnama’ actress tried her hand at making roti and did not pass it very well.

The actress took to Instagram stories and uploaded a picture of her roti, she wrote a witty caption, “The life of this roti will never come to a full circle.” The actress is quarantined with her parents and her cat. She spends time with her cat, capturing her and also gets herself shoot for the Filmfare by her mother. Nushrat is also planning to start virtual sessions where she will be talking to the doctors who are working selflessly to save the patients from the coronavirus.

The actress celebrated her birthday on May 17th with her family members. On her birthday, actors like Ayushman Khurrana, Sophie Choudry, Varun Sharma, Aparshakti and others made her an adorable video which she cherishes till date.

Nushrat Bharucha’s last movie was Dream Girl and will be next seen in Vikram Malhotra’s Chhori, and will be seen opposite Rajkumar Rao in “Chhalaang”. She is also a part of the Hindi remake of the Marathi horror drama “Lapachhapi”.