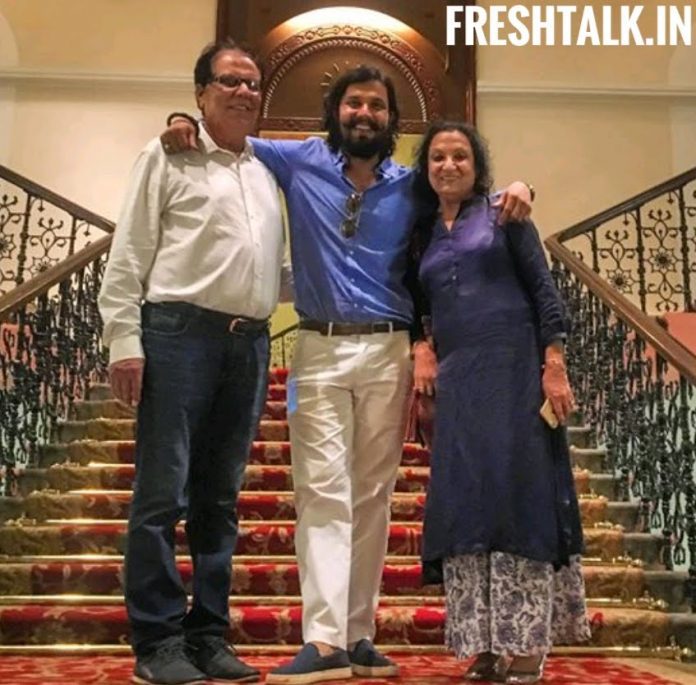 Today is Randeep Hooda’s parent’s 49th marriage anniversary so he wished his parents by writing a heartwarming message for them i.e. “happy marriage anniversary to my adorable parents”. He also expresses his love towards his parents by penning down the note for them i.e., “I would never take such steps which will wipe the smile off my parent’s faces irrespective of whatever pain I am going through personally” (मैं कभी ऐसा कोई कदम नहीं उठाऊँगा जिससे मेरे माँ बाबू के चेहरे से ये मुस्कराहट हटे, चाहे मेरे ऊपर निजी तौर पे कुछ भी बीत रही हो ) and also shared his parent’s photo along with him on the social media platform.

Randeep Hooda is an Indian actor who was born on August 20th, 1976 in Haryana. His father (Ranbir hoods) is a medical surgeon and his mother (Asha Hooda) is a social worker. He spent most of his childhood with his grandmother in their hometown as his parents used to travel a lot. He started modelling and working in an amateur theatre in Delhi while rehearsing for the play “To Teach His Own”. He made his Bollywood debut with Monsoon Wedding in 2001 and after that, he featured in several movies such as Once Upon A Time In Mumbaai, Highway co-starring Alia Bhatt, and Sarbjit co-starring Aishwarya Rai Bachchan. It has been stated that this star has been seen actively participated in the part of theatre plays and is also a scriptwriter. Apart from being a movie star, Randeep is an active sportsperson who actively participates in sports like polo and riding a horse.

Randeep Hooda loves spending time with his family. On his father’s 66th birthday, he was in Faridabad for the shoot for his movie Highway and was very keen on celebrating the day with his family so he was finally able to make it home for his father’s birthday on time. Randeep was very excited to be able to reach his home on his dad’s birthday and simultaneously, his family was also happy to meet him. Randeep Hooda is still single and during this lockdown period, he is following the guidelines issued by the government. After months he gets the chance to meet his pets as he made a special trip to meet his horse and also shared the picture by him regarding the meeting of him with his lovable colossus (horse) on social media which is quite adorable. Similarly, he gets a chance to meet his dog – “Bamby” who can be seen happily posing in the photo posted by him on social media.

Randeep Hooda is all happy meeting his horses, Check here for the post

RANDEEP HOODA Praises 4 YEARS OF HIS Film “DO LAFZO KI KAHANI”, CHECK HERE FOR THE POST

It seems that he is quite attached to his family along with his pets. After sharing his photo along with his family, few of his fans also send their warm wishes to his parents. Randeep Hooda had walked many steps to gain the status where he is today. From linkups with A-listed names in Bollywood, his confident voice, and heavenly good looks to choosing his roles carefully. Randeep finally disclosed to his fans that he is thinking about having his child through surrogacy like other actors such as Tusshar Kapoor, Karan Johar, and Ekta Kapoor and even discussed the same thing with his parents and he told that his parents are quite comfortable with his idea. He shared that he is in a relationship with his work and his immense love for animals and social work are just an extension to his personality so he told that he is very much involved in all these kind of stuff and all these things required his complete attention so currently, he is not in a mood to get married.