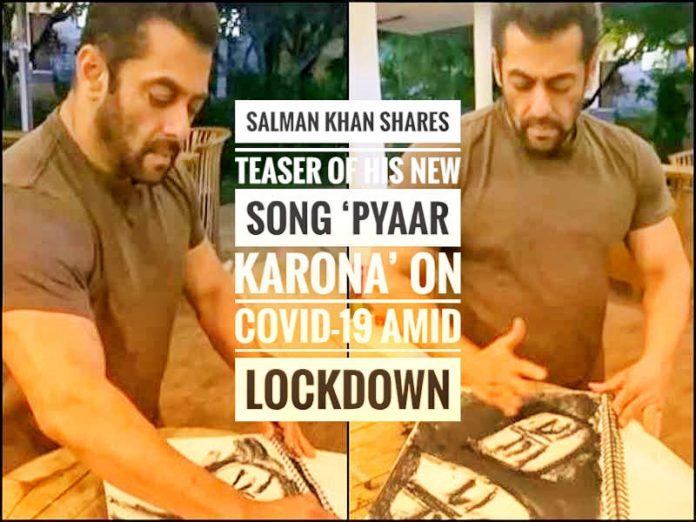 Bollywood Superstar Salman Khan has not forgotten his fans and has made sure that he keeps on spreading awareness through his videos during this lockdown. The actor is stuck at his farmhouse in Panvel with Sohail khans’ son Nirvaan Khan and his horse. Salman is repeatedly requesting his fans to stay home and letting them know how he’s quarantined at farm, he’s not leaving any chance to entertain and educate his fans. And now, the actor will be treating his fans with a music album sung by him titled as ‘Pyaar Karona’.

The song is sung and written by Salman Khan himself along with Hussain Dalaal and composed by Sajid-Wajid and will be shared on Salman Khan’s Youtube channel on Monday. In the teaser, Salman Khan is dressed up in all black with a black background with his current bearded avatar and the only coloured thing visible is his iconic bracelet, he greets his fans with a Namaste and then a Salaam in the video. The lyrics of the song go, ‘Pyaar karo Na, aetihaat karo Na (spread love, stay cautious).’

The teaser also flashes some hashtags such as #Stayhomestaysafe, #Indiafightscorona to spread awareness among people. The 54 year old actor took to Instagram and made the announcement of his upcoming single, he wrote, “So I’m posting from my handle to let you know that tmmrw on my YouTube channel, mine kya? It’s ours! Song out tmrw on it, hope u can handle it. #PyaarKaronaOutTomorrow”. Salman’s fans responded to the video by commenting “Love you Bhai” and the other one wrote “1st of all Love you Bhai, and best wishes for new Youtube channel. We are waiting for #PyaarKaronaOutTomorrow,” The actor has earlier sung many Bollywood songs like, ‘Mai Hoon Hero Tera’, ‘Tu Hi Tu Har Jagah,’ ‘Hangover’ and they all have been loved and praised by the fans.

Recently, Salman Khan shared a 10min hard-hitting video in which he’s speaking about the people who are putting themselves at risk and tirelessly providing services in order to protect the nation and also spoke about the people who are jeopardising everyone’s life by not following lockdown rules, he urged the fans to stay home and stay safe. Along with spreading awareness, Salman Khan has been taking care of 25,000 daily wage artists and also, taking care of the food and needs of the daily wage workers who are stuck during this lockdown, when it comes to help Salman Khan never steps back and he has proved his again. In upcoming months Salman Khan will be seen in his new arrivals ‘Radhe’ and ‘Kabhi Eid Kabhi Diwali’ but the release of these projects could be delayed due to the ongoing coronavirus crisis.