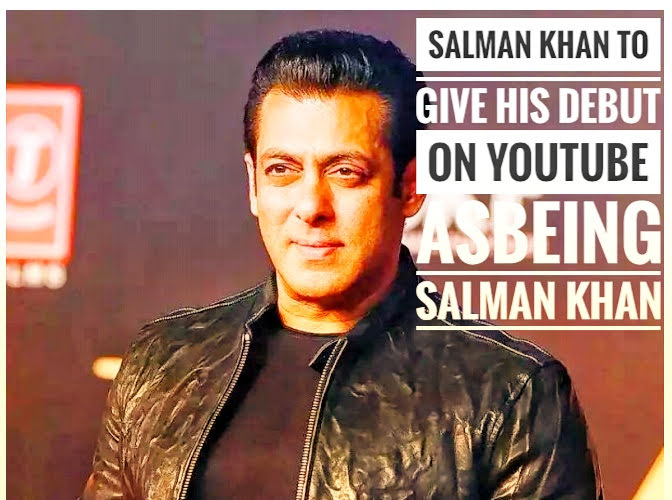 The fifty-four-year-old Bollywood superstar is all set to embark on his YouTube journey joining the long list of many other celebs who’ve started their own YouTube channels. His channel will be called ‘being Salman Khan’. Sources say that he had been thinking about it for a long time and is now all ready to set it up.

In his YouTube channel, he will be sharing glimpses of his personal life that is something his fans have always wanted. He would share his day-to-day activities with his millions of fans all over the world. This is bound to bring his fans more closer to him.
Salman Khan has always been appreciated for his raw content on social media that his fans have come to love and enjoy. His captions are always interesting and unique.

Recently, he posted a now and then video on his Instagram handle reenacting a famous scene from one of his best movies ‘Maine Pyaar Kiya’. In the original scene, Salman Khan was seen as kissing the lipstick mark left by the female lead character. In the new scene, he’s seen as wiping the lipstick mark with sanitizer and hand cloth, not only reminding us about using sanitizers but also about maintaining social distancing during this time. The caption read- “If MPK releases now, happy Easter be focused n Stay strong.”

His fans really liked the ‘recreated’ version and left many heart emojis in the comments section. One of the Instagram users commented: “Ye kya kiya? Sanitise kar diya?” Another one called it an “epic twist”.

Some time back he posted another short video with one of his horses where he appears to be chewing some grass along with the horse. The caption read-” Breakfast with my love…” Sharing is caring as they say. The video has gone viral rather quickly.
His fans really enjoy these posts and videos by him though and have always been wanting more of it. His YouTube channel will be a step in that direction.

Through his YouTube channel, Salman Khan will also be showcasing his paintings and the
songs which he has written and composed. He’ll be making more COVID awareness videos like his Maine Pyaar Kiya spinoff version.
Hopefully, his humongous fanbase would help him in spreading the awareness about the
current issues we’re facing in a fun and enjoyable way. We’re glad that he has decided to use his popularity for a good cause.