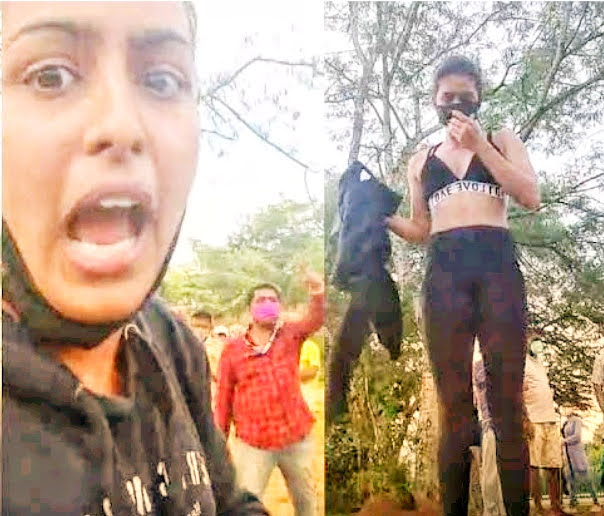 Kannada actress Samyukta Hegde is very popular among youth and she often remains in highlights for her social media posts, her photos and videos. But now she is in the headlines for something else. A video is becoming viral on social media. In this video, Congress leader Kavitha Reddy and her supporters are abusing and then attacking Samyukta Hegde and her friends. The incident is reported to be near Agara Lake in Bangalore city.

As Samyukta Hegde said that in the evening she was exercising with her friends. Meanwhile, a woman came to her and started abusing them. The actress told that the woman got angry after seeing her clothes, which she was protesting against abusive words. She used words like cabaret dancer to address them because of their sportswear. Samyukta Hegde told that the elderly lady said that “what kind of clothes you are wearing?”. If anything wrong happens with all of you after wearing this kind of clothes, then do not cry. She meant that if something wrong happens with them it will be their fault only because they were wearing sportswear. Some men were also standing around them with the same lady started threatening Samyukta and her friends that they will be named in the case of drug scandal and their whole career will be destroyed.

Samyukta Hegde says that these people surrounded him until the park was closed. The actress claims that the woman beat up me and friends. I caught them all on my camera. Samyukta told that Kavita Reddy and his supporters started scrambling in a short time. She shared the video of the incident on her Twitter account. It can be clearly seen in the video that Kavita Reddy and her supporters started to argue and hit them in the first place.

It can also be seen in her recent Instagram post which was posted on Saturday. The first image contains her tweet against the lady and her act. In the second video, we can clearly see that the lady is attempting to hit Samyukta’s friend. In the next video, we can see those other men arrive who already knew the lady and they started supporting her and telling us that we are wearing clothes that are against our culture. And then in the last video, a man in a red shirt is threatening them and saying that he will spread false news against her and that will destroy her whole career. And we can also see police standing there and listening all this silently.

After all this incident Samyukta got support from her friends, fans and her followers. Also, her friends commented on her posts that they are with her, she should stand strong against all these things from society. After that Samyukta thanked all her supporters for their support through her Instagram story.