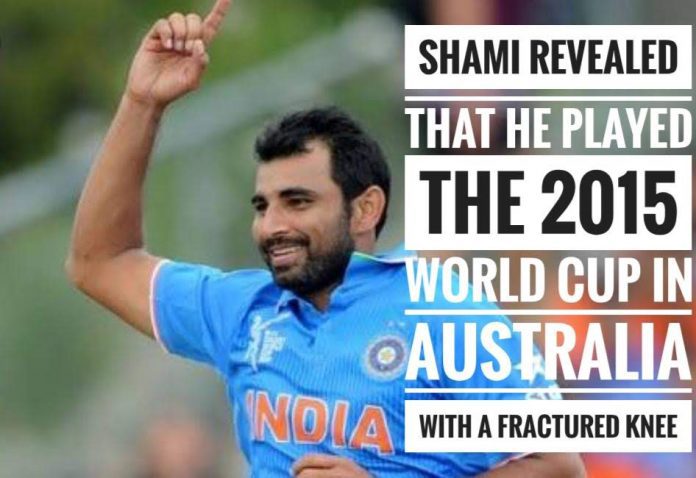 Mohammad Shami, fast bowler of Indian team brought to light on Wednesday about his knee injury during the 2015 World Cup in Australia and New Zealand. He opened up about this while going live on Instagram with a former Indian cricketer, Irfan Pathan.
Shami was the second leading wicket-taker for India during the tournament following Umesh Yadav who played an extra match than him. He took away 17 wickets in 7 matches with an average 17.29 while Yadav bagged 18 wickets at 17.83 in 8 matches.
Shami disclosed that he suffered the injury in the very first match and played the entire World Cup with the fractured knee. His thighs and knees had become of inform proportions and the doctors used to take out the fluids at regular intervals. He confessed about gulping three painkillers everyday to keep the pain in control. It used to get difficult for him to walk after the matches.

Shami accredited his performance in the World Cup to Nitin Patel, who instilled courage in him and to ex-captain of Indian team, M.S.Dhoni who encouraged him on and off field to continue with his playing, especially at the semi-finals against Australia.

His pain had intensified to a great extent on the day of the semi-final and he had a prior discussion with his teammates and the management. They imbued in him a sense of self-assurance and said it wouldn’t be possible to go for a new bowler at such a crucial time. He bowled for the first five overs and gave 13 runs to the opposition with a wicket. When he couldn’t run further, he informed Mahi about his condition and was given an injection, though his health deteriorated after that.

Mahi told him that he cannot trust any other part-timer and urged to carry on with the match. He just asked him to be aware that he doesn’t give more than 60 runs to them. A 4mm piece had fragmented off from his knee. Some claimed that his career has come to an end due to the injury or he may not perform well in further matches. But after the surgery, Shami defied all odds and have kept up his pace.

India lost the semi-finals to the Aussies in Sydney. The Australian team made a total of 328 runs and bowled out India at 233 because of the performance by their Pacers Faulkner (3/59), Starc (2/28) and Johnson (2/50).