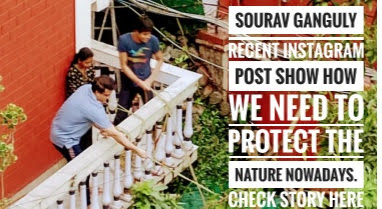 Sourav Ganguly, the former Indian skipper and Board of Control for Cricket in India (BCCI) president, has a thing for balconies. In another post of “strength at its highest”, Sourav Ganguly, who is spending all his time at home in Kolkata due to the coronavirus lockdown, lifted, pulled back and fixed a mango tree in his balcony.

He posted a couple of pictures of doing an aforementioned activity on Instagram and Tweeter and captioned it as “The mango tree in the house had to be lifted, pulled back and fixed again strength at its highest.”

The BCCI president Sourav Ganguly was amongst the one who had to sustain Cyclone Amphan, but fortunately, the only damage it caused at his house was the uprooting of a mango tree.

Ganguly resides in a palatial bungalow in the Behala area of Kolkata, had to fix the age-old tree at his house which got uprooted due to the cyclone.

On Wednesday evening, after making landfall Cyclone Amphan wreaked devastation in West Bengal and Odisha causing havoc to life and property in eastern India and Bangladesh reported at least 84 casualties in both countries.

In several coastal villages, towns and cities, including Kolkata and Howrah extensive devastation to the property have been reported. Amphan, the most powerful cyclone to hit West Bengal in over a decade, left a trail of the wreck with devasted villages, uprooted trees and bridges washed away.

Most of the deaths were caused the uprooting of trees by winds that gusted up to 185 km per hour (115 mph), and a storm gush of around five metres that inundated low-lying coastal areas when the cyclone barrelled in from the Bay of Bengal on Wednesday.

Since making landfall, Cyclone Amphan, which was classified as a super cyclone at its peak intensity, weakened and on Thursday morning, the India Meteorological Department downgraded it to a cyclonic storm. Although it has debilitated now, Cyclone Amphan was generating winds of up to 170 kilometres (105 miles) per hour with maximum gusts of 190 kph (118 mph) when it made landfall.