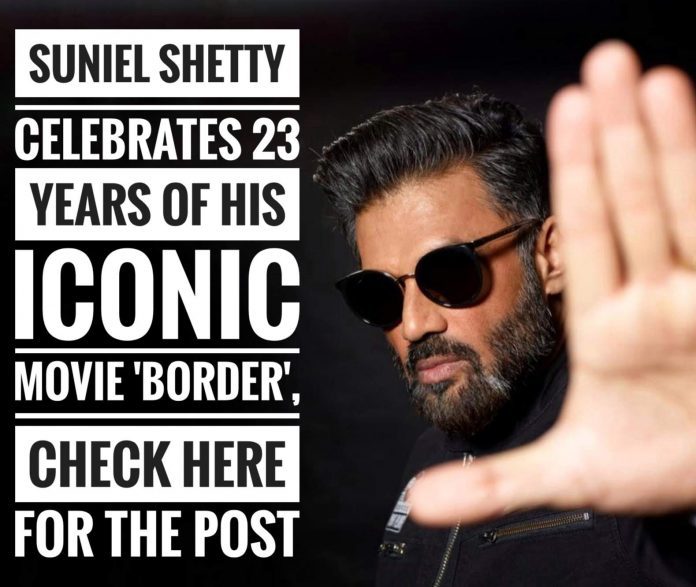 There are a lot of movies based on patriotism made in Bollywood but one movie which has not lost its shine even after 23 years is BORDER. This was one of the patriotic movies which have done tremendously well. It can be considered as JP Dutta’s, the filmmaker of boarder, biggest hits which were released on June 13, 23 years ago.

A very famous veteran actor, Suniel Shetty, who is known for his fine and fierce acting has shared a very beautiful poster of movie BORDER in his Instagram handle reminiscing his movie which was made 23 years back.

Suniel Shetty was playing one of a lead role of BSF Commandant Bhairon Singh in the movie and audience has loved his acting since then.

Sharing the poster of BORDER which was made by one of his fan quoted, ““Blessed to be a part of this beautiful film.”

The audience seems to enjoy the post and a lot of comments are popping for wishing him the completion of 23 years of the movie. We can see a lot of celebrities are also congratulating him for the same.

All in all this movie was historic and was an unforgettable epic film in the btown. Border not only have a very good storyline but also have wonderful music. Even today the songs and the movie are played on patriotic events. Music of these films is often played at patriotic screenplays and events.

Anu Malik who was the music composer of the movie has also shared the poster of BORDER and wrote “the most loved patriotic song “sandese aate hain” reverberates across the world even today Jai hind Jai Bharat thank you, JP Dutta Saab, for having me as the composer of such magnificent film BORDER.. 23 years and counting”.

We can definitely say that this movie is OLD BUT IT’S STILL GOLD.