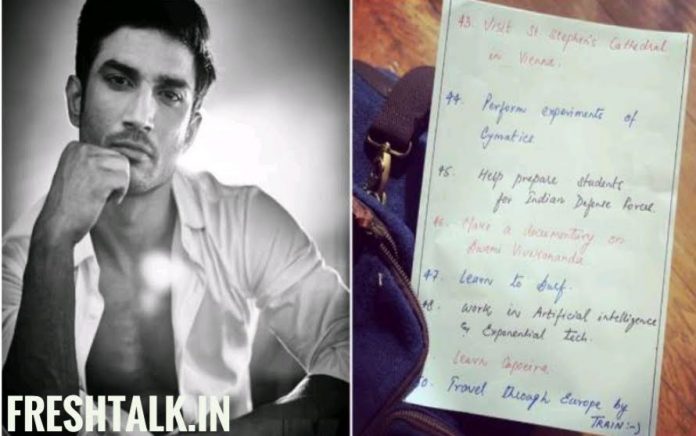 50 HEARTWARMING WISHES IN THE DIARY OF LATE SUSHANT SINGH

It aches my heart to write that the man who taught us that suicide is not an option, in his movie Chichhore, chose the same for himself. On 14th June 2020, Sushant Singh Rajput committed suicide at the age of 34 and was found dead at his flat in Bandra, Mumbai. This was extremely shocking and heartbreaking news for the Bollywood industry and for all of us. We have always thought of Sushant as a very lively and positive person but you never know what a person is going through.

Unfortunately, he is no more with us but he has given us the best of movies that will stay in our hearts forever. Sushant will never be dead from our hearts and memories. Some of his best movies were Kai Po Che, MS Dhoni, Raabta, and his last movie is ready for release- Dil Bechara, which was to be released on 8 May but due to the pandemic, the date was postponed.

Sushant had 50 wishes written in the diary which was found from his room and we would love to share those with his fans and his well-wishers. Out of 50 wishes, he had fulfilled 12 wishes.

Here’s his wishlist which will leave you teary-eyed-

These wishes prove that truly Sushant was a physics enthusiast. Also, this man got AIR 7 in an engineering entrance exam.
I am sure his fans must have added some of his wishes to their own wish list in the memory of Sushant.
Eagerly waiting for his last movie- Dil Bechara, which will definitely give goosebumps due to the fact that it will the last time Sushant will be seen on a big screen.
Hope he survived to complete his wish list.
This really was not fair.
You will be missed Sushant.