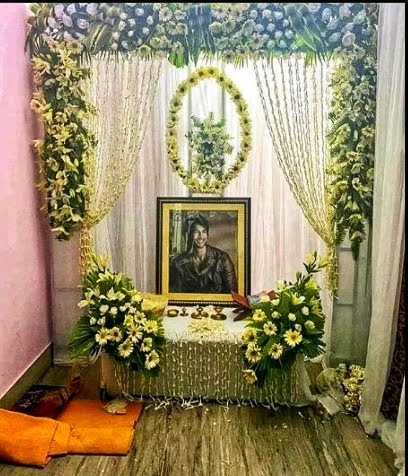 Bollywood lost another gem on June 14. Sushant Singh Rajput was a famous star in Bollywood. He was a star kid and became a motivator for other students. He had finished his schooling at Patna. According to his teachers, he is not only good at academics but always had a way of standing out in the crowd. Now Sushant Singh Rajput’s family organised a prayer meeting for him at their Rajiv Nagar Residence in Patna.

His family held a prayer meet after a week for relatives, friends and well-wishers at their residence in Patna. Manu local leaders including Bihar’s deputy CM Sushil Kumar Modi and actors from Bhojpuri film industry. The Union minister of law and justice, Ravi Shankar Prasad visited his home in Patna and offered condolences to his family. Since this case is under investigation. Police have interrogated 15 people so far including Sushan’s rumoured girlfriend Rhea Chakraborty.

While his ashes are mesmerized in the Ganga river on June 18 by his father KK sigh, his two sisters and other family members. Sushant last has seen in the film ‘Chhichhore‘. On the other hand, Kumar has accused Chakraborty of his death whom she dumped after her career was secure and her purpose was served.