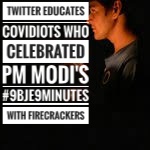 On 5th April all the citizens of the nation came forward to participate in this activity. People lit diyas and candles and even twinkled the phone’s flash lights around them .
Our B-TOWN’S celebrities also came forward and as announced by the prime minister did this activity whole heartedly. From Deepika padukone to Esha Deol ,everyone were seeing lighting diyas and candles. B-TOWN’S stars have an enormous fan base and therefore their such good deeds inspire people to do something good. Their vibe and acts of obeying the prime minister and doing all his announced activities and pledges encourages their fans to obey our prime minister and to stand as a model of unity as a nation. The citizens of the nation stood as solidarity with nation as they light diyas and candles .

While giving the audio message on april 3rd for #9baje9minute. Mr. Narendra modi asked the citizens to obey the norms because in the janta curfew some people went out in streets in a group and to perform the janta curfew and that led to the spread of COVID-19 across the nation. This time for April 5th pm pleaded the citizen to kindly obey the laws and be particular about the activity.
But we don’t think the citizens were able to hear the prime minister’s precautionary part in the video!
Let us take you to more details regarding this.

Prime minister Mr. Narendra modi is very particular about the rules and regulation . He kept on pleading the people to obey the rules while doing #9baje9minute activity. He was imprisoned by the people who obeyed all the rules but was saddened and distressed to know that many people didn’t obey him accurately and instead of lighting diyas and candle have burnt crackers. Since corona virus has a symptom of shortness of breathing as one of its symptoms, burning crackers led to an increase in the air pollution and it may have worsen the situation .people were not serious about the spread of covid-19 showed their activity of burning crackers. Be it illiteracy of the people or stupidity of the people , it surely have led to an increase in the amount of pollution in the air.

As videos and pictures of people lighting diyas and candles were going viral on social media including twitter . Along with that people have tweeted about the stupidity of the people who have burnt crackers in the amidst of corona virus in the name of prime minister and corona virus. People have uploaded the videos and pictures of people around them who were burning crackers.
Various stars have tweeted showing their anger towards the activity of people who burnt crackers instead of lighting diyas and candles.

The millennial influencer and actor /comedian Bhuvan Bam
Tweeted: RT if you can hear crackers too.

Journalist Raj deep sardesai tweeted:
Some people in my area now bursting crackers. What kind of utter nonsense is this. You have singularly mocked at PM’s appeal: this is not bloody Diwali but a solemn occasion. Spend Money

Actor sonam kapoor Ahuja tweeted and said:
There was complete peace and quite, and now the birds ,dogs and sirens are freaking out in south Delhi because some morons decided to burst fire crackers tonight.

Various other twitter users also tweeted showing their anger on the stupidity of the people. A resident of Delhi even shared a video of a building catching fire due to the burning crackers!

Hope stupidity of some people will not effect the lives of other people and people suffering from COVID-19.
Also on the recent update the total confirmed cases of people affected from COVID-19 are 4067 and people recovered and total deaths are 292 and 109 respectively.