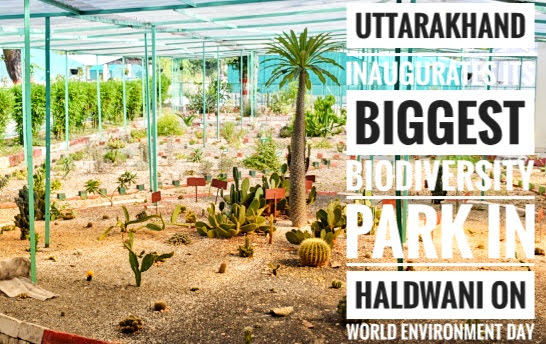 The biggest biodiversity park of Uttarakhand was inaugurated in Haldwani on Friday on the occasion of the world environment day. This park is spread over the area of 18-acre and is being named as the “Uttarakhand Forest Research wing Biodiversity park”. This park has a total of 500 different plant species along with the 40 sections that revolve around different environmental themes. Today in the morning, the inauguration ceremony of this park was being done by the Research wing of Uttarakhand Forest Department along with the chief conservator of the forest – Sanjeev Chaturvedi at the premises of Uttarakhand in Haldwani on World Environment Day.

This Biodiversity park also features Sarv Dharm Vatika with tree species which are been considered as the holy in different religions. This park considered all the aspects including science, health, aesthetics and conservation. Biodiversity park also has the medicinal plants and a separate zone is been specially designed for the cactus family which consists of 150 different species. So for your information, I would like to tell you that the food we eat, the air we breathe, the water we drink and the climate that makes our planet habitable all comes from nature. Despite all the benefits that our nature gives us, we human beings still mistreat it so it is our responsibility that we should work on it by preserving the natural habitat.

World environment day is being celebrated every year on June 5th engaging celebrities, citizens and government officers to focus their efforts on a pressing environmental issue. So, this year the theme is “Biodiversity”- a serious issue that is both urgent and existential. World environment day offers a global platform for inspiring positive changes. Now, a global prevailing disease pandemic shows the interdependence of humans and the webs of life, in which they exist. The foundation of Biodiversity supports all life on land and below water. Human actions like cutting of trees, the killing of wildlife habitats, damaging agriculture and acceleration of climate change have pushed the nature beyond its limit. If all human beings continue to remain on the same path then the biodiversity loss will have a severe impact on humanity including the disintegration of the health systems.

It has been revealed that if human beings keep on destroying the biodiversity and the systems which support us then surely it will result into a pandemic disease which today the whole nation is suffering because it has been estimated that, globally, there are around more than billion cases of illness and millions of death are occurring every year because of this infectious virus i.e. Coronavirus and as per the scientist, they have stated that almost 70 per cent of infectious diseases in humans are transmitted to them through the animals. This biodiversity park situated in Haldwani has been prepared in a very low budget. 36 types of medicinal plants have been planted in this biodiversity park. In a very interesting way, it has been told which plant is beneficial for which part of the human body.

Biodiversity Park has Buddha Vatika, rudraksha Vatika, Sarva dharma Vatika, nine planet Vatika, Nakshatra Vatika, Rashi tree Vatika and haldu Vatika. It also consists of Jurassic Park in which the vegetation of the Jurassic period is kept. Interpretation centre is a special part of the park. It contains eight types of soil found in the state, seeds found in mountainous areas, different types of corns and many other things. This park is made for the public with very few resources. Through this park, they want to convey the message that vegetation plays a wonderful role in human beings life.