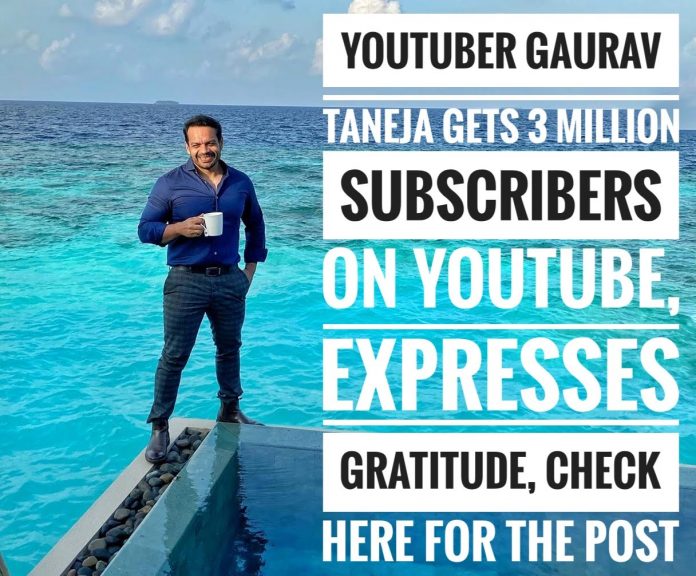 Despite being a commercial pilot, Taneja is known for his YouTube channela.he has two channels on the video-sharing platforms: Flying Beast and Fit Muscle TV. The first one is a travel vlogging channel and other things related to his personnel life, the second one is a fitness channel, where he provides tips and guidance for people who like bodybuilding and gym.

Now the YouTuber Gaurav Taneja is in limelight for getting 3 Million subscribers on his Flying Beast YouTube channel, Taneja expressed gratitude to his subscribers for their love and support. He shared a story and post to expresses his gratitude towards his fans.

Taneja came into a headline on June 14 after tweeted that he has been suspended by AirAsia India “ for standing up for safe operation of an aircraft and its passengers”. The next day, he posted a detailed video on his popular YouTube channel, called Flying Beast, titled “Reasons behind suspension from my pilot job”.

In the video, he alleged the airline has asked its pilots to do 98 per cent of landings in ‘flap 3’ mode, which allow it to save fuel. He said if a pilot does not do 98 per cent of landings in ‘flap 3’ mode, the airline considers it a violation of its standard operating procedure (SOP).
The video has garnered over 3 million views and over 60,000 comments, mostly appreciating the pilot for his move, despite this, his passion for fitness has been an inspirational force for many people. Moreover, Gaurav Taneja was also invited to deliver a TEDx speech at the Manipal University in Jaipur.

Today he is a youth icon who has been spreading positivity and giving a ray of hope to stay fit and live a healthy lifestyle, He expressed love and gratitude to all his fans for making him one of the biggest fitness influencers in India.