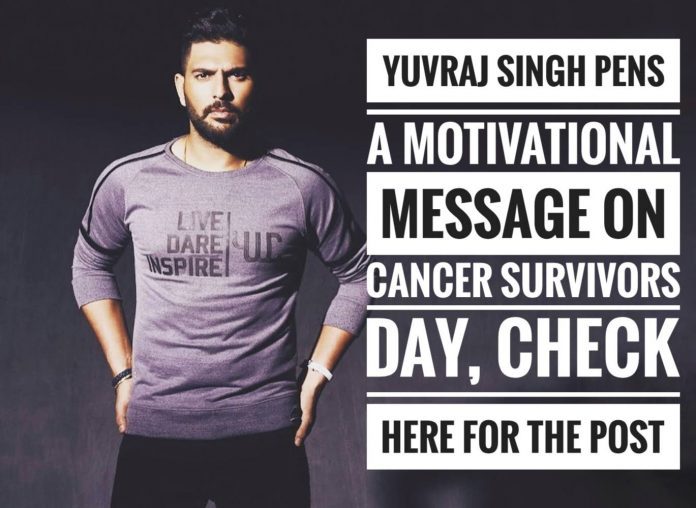 On the occasion of Cancer Survivors Day, Indian cricketer Yuvraj Singh wrote an inspiring message on Instagram to all the people battling cancer.

In 2011, Yuvraj Singh was diagnosed with a cancerous tumour in his left lung, close to his heart. The tumour was malignant a germ cell cancer called mediastinal seminoma. This tumour is different from lung cancer and unlike it, it has a much better survival rate. It actually
arises from the mediastinum and not from the lungs.

“AT FIRST I WAS IN DENIAL ABOUT IT — PLAYING FOR INDIA WAS MORE IMPORTANT THAN MY HEALTH AND FOR A FEW MONTHS I CHOSE TO IGNORE THE BLOOD I SPAT OUT OR MY DECLINE IN STAMINA.” – YUVRAJ SINGH

Soon after his diagnosis, he went to the US, Boston and Indianapolis to get his chemotherapy is done. His chemotherapy ended in March and he came back to India in April that same year.

Yuvraj made his comeback with Twenty-Twenty against New Zealand in September 2012. In 2012, Yuvraj was conferred with the Arjuna Award. In 2014, he was awarded the Padma Shri, India’s fourth-highest civilian honour.

This cancer survivors day, Yuvraj took it upon himself to pen a motivational message for the people battling with cancer. He wrote: When life gives you a 2nd chance, it should be used for the greatest good. Being a survivor, I know the pain and agony of fighting cancer.

On #cancersurvivorsday I once again pledge to take care of those battling cancer. Don’t give up. #Togetherwecan #youwecan.