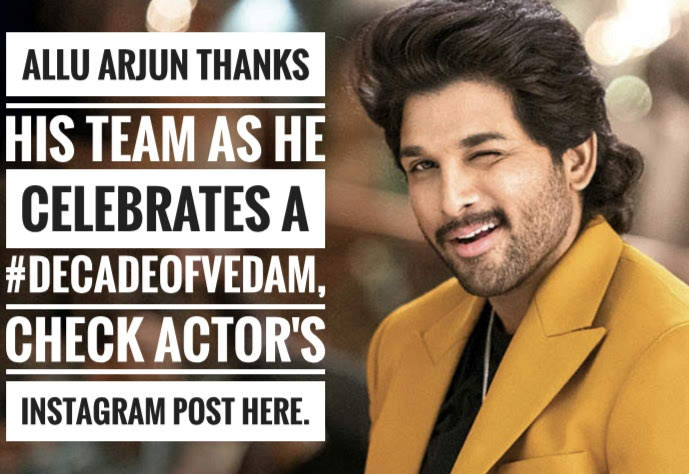 South Superstar Allu Arjun recently thanked the whole team of his movie Vedam, which was released in 2010. His movie completes the
decade.

This was released on 4th June 2010, which completed 10 years. Many superstars like Allu Arjun, Anushka Shetty, Deeksha Seth, was
starred in this movie. Krish was a director of this movie.

Allu Arjun thanked his whole team on Instagram said, “A Decade of Vedam. I would Like to Thank each and everyone who is a part of
this beautiful journey. I heartfully thank @dirkrish for his vision n passion. And I would like to thank @HeroManoj1 #Anushka
@BajpayeeManoj Ji & many other actors & technicians for their support. Spl THANKS to MMKeeravani Garu, gyanahekar garu & other technicians. I heartfully thank Arka Media for believing in us. #DECADEOFVEDAM”.

This movie was a big hit and fans loved this movie.