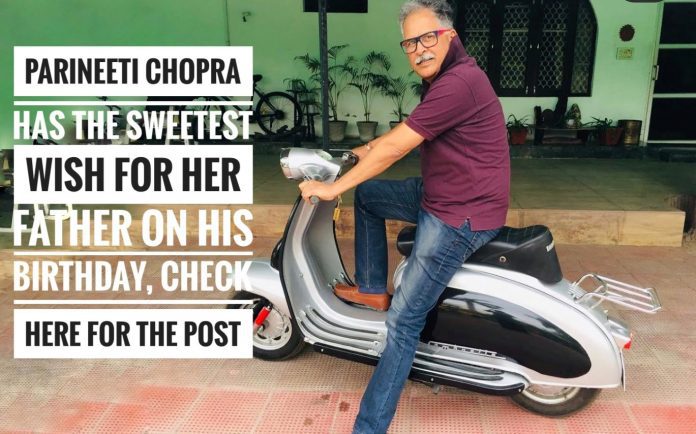 Ishaqzaade actress Parineeti Chopra took to Instagram to wish her father, Pawan Chopra on his birthday. The actress shared a series of photo and videos, the photo was from Parineeti’s childhood and their vacation throwback. She penned down a heartwarming message for her father and also revealed that her father is the one who put singing in her veins.

With the series of photos she wrote, “My dad. The guy who put singing into my veins. He sings before he talks. Makes fun of everything. Everything. Is car-obsessed. Buys scooters and redesigns them. Feeds everyone else before eating himself. Does not understand the concept of ordering “less” from a menu. Army businessman. Mimics every human being he meets. (This means he likes you). Insists on growing every vegetable at home. Hates processed food. Works out 2 hours every morning and puts us to shame. Cannot eat curd if it has malai. 3 bowls of dessert are nothing. HAPPY BIRTHDAY, DAD! 🧡 @pawanchopra01 P.S. Our parents send us these singing videos from every holiday they take. 😊 Many other Bollywood celebrities like Priyanka Chopra and Anupam Kher commented on Parineeti’s post. Her father Pawan Chopra also took to Instagram to comment on his daughter’s post for him, he wrote, “Wow … wonderful 😍😍😍😍😍I don’t have to tell you how much I love you”

On the work front, Parineeti will be seen next in Saina Nehwal’s biopic. She will also feature in the remake of the mystery thriller ‘The Girl on the Train’.