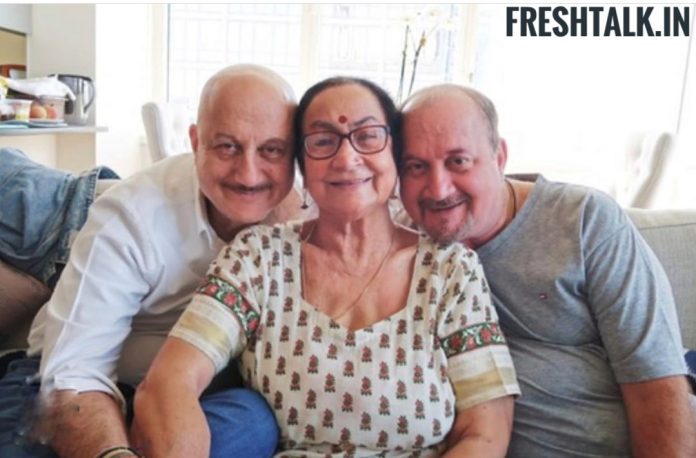 Anupam Kher’s mother, Dulari Kher, brother, sister-in-law, and niece, were tested positive for corona a few days back after which his mother who was critical was admitted to the Kokilaben Hospital.

The rest of the members are quarantined at the 11th floor of Metropolis High Rise building. The veteran actor Anupam Kher on Friday took to his social media handles to update everyone on his mother’s death. He posted her mother’s picture and captioned it, “Mother in better than before. Jai Shree Ram.”

A few days back Anupam had shared a picture on Instagram and claimed that his mother has not yet been informed of the true reason behind her getting hospitalized.

Anupam Kher also got his test and was found to be negative. At present, he is quarantined at his home in Juhu, while his servants, chef and drivers are staying in separate rooms as per precautionary measures.

He thanked his followers for their best wishes and also suggested to take coronavirus seriously. He further added that social distancing is not just a word and to understand its practicality.

Anupam Kher is totally mesmerized by a devotional song of lord Shiva sung by a devotee, Watch the video here.