Bigg Boss 14 – Aly Goni gets physical during the captaincy task, Nikki Tamboli lashes on Rahul Vaidya. Bigg Boss 14 is set to turn into a war zone. Well, Nikki points out that when she said a bad word for Jasmin Bhasin, Aly Goni told a lot of things for her.

Now, when Rakhi Sawant did the same thing, Aly was seen laughing at me. Nikki says that she did not like the behaviour. Soon, Aly defends himself.

Later, Aly gets angry and calls Nikki a ‘fraud’. They get into a physical fight but housemates calm them down. The show is getting intense as it’s reaching close to its finale. BIGG BOSS 14- Sonali Phogat throws food in the dustbin, housemates gang up and SLAMS her… 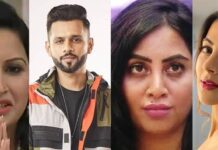