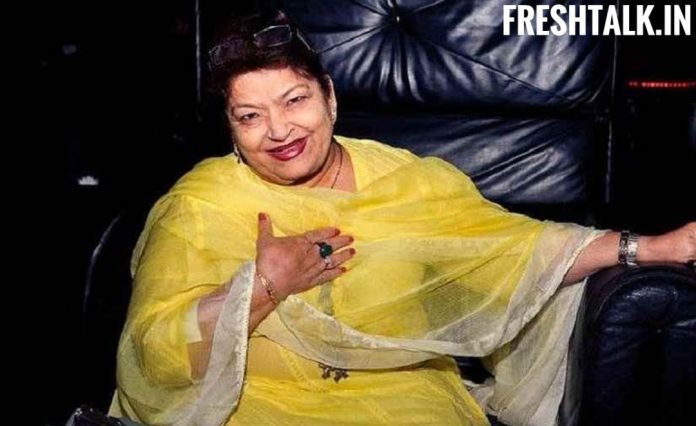 One of the most prominent and leading Indian Dance choreographers in Hindi cinema who is known for her effortless dance and beautiful grace, saroj khan, is no more between us.

The ace choreographer Saroj Khan breathed her last in the wee hours of morning due to cardiac arrest.

According to the sources she was admitted to hospital at around 1 a.m. and she died around 2:30 a.m. at the hospital, says MS Khan Nephew Manish Jagwani. The 71 years old choreographer died due to breathing difficulties.

We can say that saroj khan was a gem in Bollywood, the veteran Bollywood choreographer Saroj mentored many known actors and actresses. She wasn’t only a choreographer but three time national award winner who had choreographed some of the most memorable songs in Hindi cinema which got a lot of love and appreciation.
Every person from the industry is grieving and giving tributes for the veteran choreographer.

Akshay Kumar took to his Twitter handle to  show his condolences and said “woke up to the sad news that legendary choreographer Saroj Khan ji is no more she made dance look easy almost like anybody can dance huge loss for the industry may her soul rest in peace.”

The  airlift actress Nimrat Kaur twitted “Saroj Ji’s name introduced the word choreographer to my life. A genius who immortalized stars and the music that define an era with the iconic work. May her loved ones find strength and courage at this terrible hour. There will never be another…#RIPSarojKhan #Legend #Masterji ”.

Not only celebrities but also  Maharashtra home minister Anil Deshmukh has took his Twitter and said “saddened to hear of ace choreographer and three times National awardees Saroj Khan demise at 71. Many of the 2000+ iconic songs she choreographed have a permanent place in audience’s heart. Deepest condolences to her family, friends, colleagues and fans! #RIPSarojKhan

Saroj Khan has worked in some of the best movies as a choreographer. She won three national awards for Devdas Jab We Met and the 2000 Tamil film shringaram.
She worked for 40 years in the Bollywood industry in the span of these 40 years she has choreographed a lot of iconic songs such as Dola Re Dola from Sanjay Leela Bhansali Devdas staring Aishwarya Rai Bachchan, Madhuri Dixit and Shahrukh Khan, Jab We Met, Ek Do Teen feature Madhuri Dixit from Tezaab. She had last worked with Madhuri Dixit in the movie kalank.