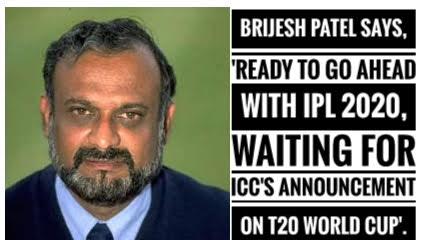 The Board of Control for Cricket in India (BCCI) is trying its best to get the Indian Premier League (IPL) 2020 scheduled sometime later this year. Board President Sourav Ganguly recently confirmed that “BCCI is looking at all possibilities of hosting the IPL this year, even if it means playing the tournament in empty stadiums.”

Sourav Ganguly in his letter to all affiliated members of the body stated that “The BCCI is working on all possible options to ensure that we are able to stage the IPL this year, even if it means playing the tournament in empty stadiums. The fans, franchisees, players, broadcasters, sponsors and all other stakeholders are keenly looking forward to the possibility of IPL being hosted this year.

“We are ready to go ahead with the IPL. But we can start planning the schedule formally only after the official announcement is made on the T20 World Cup, which I’m expecting will arrive anytime soon. On our part, we’ve already earmarked the September-October window
for the tournament to be played,” Patel told TOI.

IPL governing council chairman Brijesh Patel has also confirmed that while a different the window is being looked at for scheduling the tournament, officials might not mind organising it overseas after an official announcement is given by the ICC over the future of World
Twenty20.

Patel further added that the planning was at a tentative stage as they would finalise things only after getting clarity over the future of the World T20. “Right now, we’re saying it’s tentative because finalities of the schedule can only be worked out once official confirmations arrive. Talks are going on with the league’s multiple stakeholders and we’re all on board. So, it’s a matter of time before we start putting things in
place.” – Brijesh Patel.

On the chances of hosting the tournament overseas, Patel added, “Suppose we shift just the first leg out of the country, we will have to go through quarantine when we fly there. But we may probably also have to go through another quarantine when we’re back for the India’s leg
if Covid doesn’t relent. Or who knows, by October things will be different. Let’s see. Right now, we’re not ruling out the idea of playing the whole tournament overseas.”

Given the current situation of the pandemic in Australia and World-wide, it’s unlikely that the World T20 would go as per schedule. Meanwhile, the ICC said it would take a final call regarding the future of the tournament next month.