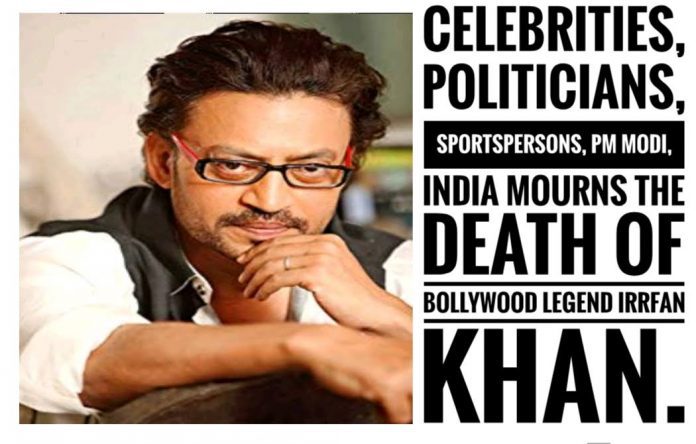 Irrfan Khan was one of the most talented actors of Bollywood. His acting brought a commendable revolution in the field of acting. His work and movies were a treat to the eyes. His dialogues weren’t just limited to the script but felt surreal when he spoke them with such a feeling, his expressions, his aura, his grace together made him the finest actor. His contribution to art in Bollywood will always be remembered and will always be cherished by watching the works he did on the screen.

It was really disheartening to know about the former’s demise. People weren’t ready to accept that their dear had departed from them forever. He was such a humble personality that today everyone is wishing that his soul may rest in peace.
Irrfan’s various fans are posting his dialogues, pictures and clips of his work as a form of tribute to him .he was loved by all and will be loved and remembered by everyone forever.

Actor Priyanka Chopra Jonas on her Instagram, in remembrance of Irrfan Khan, wrote “the world will always remember your legacy #irrfankhan. You fought like a warrior. Rest in peace my friend.. my condolences to the family.

Director Mahesh Bhatt wrote a very emotional thought in remembrance of his friend Irrfan, he wrote: Maine dil se kaha , dhoond lana khushi , namsamjh laya gum hi sahi . Remember singing this song holding his hand. when I met him after he was diagnosed. He smiled. The warmth of that smile lingers. Alvida dost.

Sania Nehwal took to her Instagram to offer her condolences and wrote, I still remember how you help me act so easily during one ad shoot .. great memories sir #ripirfankhan

Our prime minister Narendra Modi was in a state of shock to know the demise of Irrfan khan and offered his condolences to his family.
He on his Twitter account tweeted, Irrfan Khan’s demise is a loss to the world of cinema and theatre. He will be remembered for his versatile performances across different mediums. My thoughts are with his family, friends and admirers. May his soul rest in peace.

Arvind Kejriwal the chief minister of Delhi wrote, Shocked to hear of the demise of Irrfan Khan, one of the most exceptional actors of our time. May his work always be remembered and his soul rests in peace.

Our legendary cricketer Sachin Tendulkar wrote, Sad to hear the news of #IrrfanKhan passing away. He was one of my favourites & I’ve watched almost all his films, the last one being Angrezi Medium. Acting came so effortlessly to him, he was just terrific. May his soul Rest In Peace. Condolences to his loved ones.

Irrfan’s simplicity glowed like a diamond, his acting was as surreal as droplets of rain, the man who wasn’t “QARIB QARIB SINGLE “ didn’t study in an “ANGREZI MEDIUM SCHOOL” but still got cast in Hollywood, despite fighting with cancer he still had the “JAZBAA” to make us realize what quality acting is, the man whose movies were often the topic of discussion while eating our “LUNCHBOX” it’s hard to believe that today was his “D-DAY”.