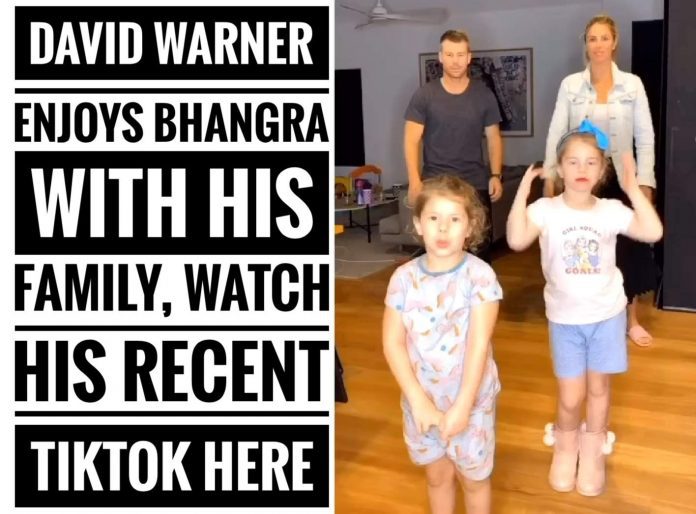 David Warner, cricketer, on Saturday posted a new video of his family doing Bhangra on a fusion song.

David Warner with his wife and daughters.

Ever since his arrival on the short sharing video platform, Warner hasn’t failed to keep his fans entertained by posting short videos of him enjoying some ‘quarantine lifestyle’.

The cricketer is seen on numerous occasions to have been enjoying dancing on hit Bollywood songs with his family. You can find some snippets of him dancing on his official Instagram account @davidwarner31.

From dancing on a hit Katrina Kaif song with his daughter to lip-syncing famous dialogues of South Indian superstars like Prabhas and Mahesh Babu, the Australia opener has truly tried all things during the lockdown and his craze for Bollywood is seen more clearly.

On Saturday, Warner posted a video of him and his family doing Bhangra, on Instagram with the caption that read-

While we have seen Warner trying on his dance moves before, this was a new experiment wherein he tried some Indian moves. It was evident from the video that his family enjoyed it to the fullest.

The video immediately saw a great response from his fans and it’s safe to say that the Warner Family has definitely our hearts.

David Warner has been up and coming with his videos on Instagram and doesn’t really like to keep his fans waiting.
He’s also been seen coming live on the social media platform frequently.

His partner and friend Virat Kohli were seen speaking to off-spinner Ravichandran Ashwin and said that Warner has “been after my life” to make a video. “He’s been asking me to do one. I haven’t responded yet, but I will,” Kohli told Ashwin.

We don’t really know if the cricketer will also join his friend on TikTok but what we are sure of is that David Warner is in no mood to halt his dancing and is keeping it simple by enjoying with his family and sharing that with the world.