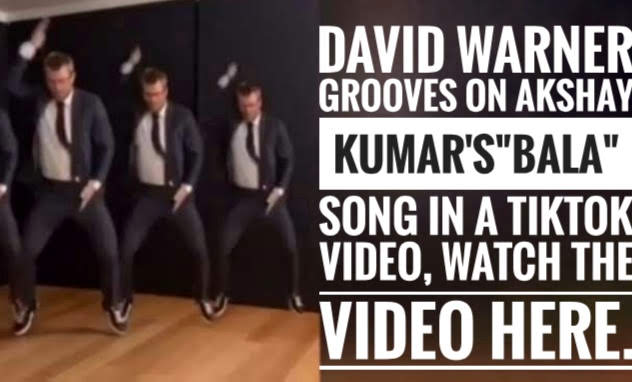 David Warner, who has taken social media by storm with his TikTok videos, took to Instagram to share a video in which he can be seen enjoying his Friday night by copying a famous Bollywood dance step, originally performed by Akshay Kumar.

In his latest antics on the video-making app, he can be seen grooving to Housefull 4’s popular track ‘Bala’ featuring Akshay Kumar. The veteran cricketer can be seen dressed up in a suit in his latest video while performing the hook step of the song.

The cricket action is currently at a standstill due to the outbreak of novel coronavirus and players are taking it to social media to engage with fans through Q&As, interviews and video content.

“I think I’ve got you covered @akshaykumar #bala #fun #friday #challenge Friday nights,” wrote Warner while sharing the video on his Instagram handle. Just like many other videos of Warner, this clip also got viral in a jiffy and the comment section of the post was also filled
in no time.

Warner also made a special request to Indian captain Virat Kohli, after the latter commented on his video. He asked Kohli to duet his videos on Tiktok, saying his wife can help him set up an account. It would be definitely interesting if Virat Kohli does end up joining TikTok, given all the current controversies regarding it.

Not too long back Warner’s former teammate Mitchell Johnson had brutally trolled him after watching one of his many TikTok videos. “I would say you’ve officially lost it but not sure you ever had it, Bull,” Johnson had commented on a video Warner had shared on Instagram.

Meanwhile, Australia and New Zealand Cricket Board are planning to resume the ODI series which was postponed in March earlier this year due to the rapidly-spreading disease. So, fans could well witness Warner’s exploits with the bat soon.