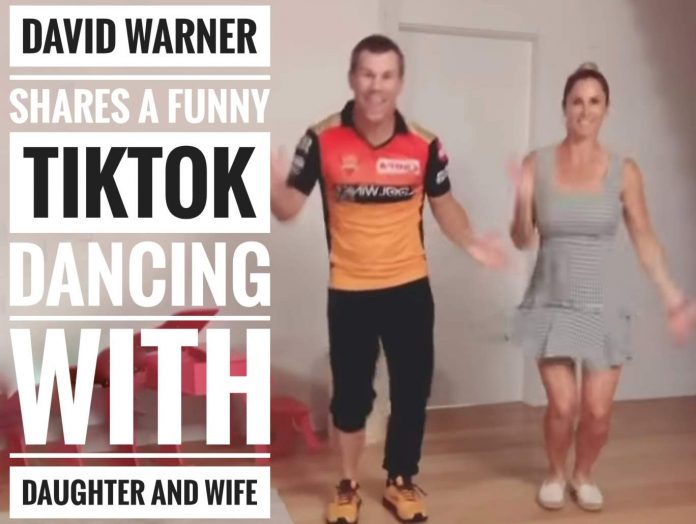 David Warner, Australian opening batsman has been seen spending family time as the world fights the coronavirus battle and due to that, all the sports events have been suspended. Warner was supposed to lead the SunRisers Hyderabad in IPL 2020 which has been postponed indefinitely.

Warner for sure has developed a liking for the Indian songs and is seen adding his touch to them. On Thursday, the cricketer posted a TikTok video on his Instagram handle in which he and his wife, Candace Warner is seen grooving on the Telugu song “Buttabomma” which is from the Telugu movie ‘Ala Vaikunthapurramuloo’ starring Arjun Reddy and Pooja Hedge. The cricketer and his wife are seen doing the signature step of the song along with their daughter performing her hilarious bits behind them. “It’s TikTok time Buttabomma get out of your comfort zone people lol Candice Warner,” the cricketer captioned the post.

Earlier, Warner posted a video with his daughter grooving on a popular Bollywood song ‘Sheila Ki Jawaani’ which went viral on social media. He also shared a video, in which he and his wife are seen switching jobs. The video started as Warner is dressed in Australian Cricketer Jersey and his wife virtually kayaking beside him, then they switch the costumes and Warner is seen in swimsuit whereas, his wife is seen in a cricketing kit. Warner has been fully enjoying the quarantine with his family and side by side entertaining his fans on social media.

David Warner was about to lead the SunRisers Hyderabad in 13th IPL Edition. The cricketer has been featured in 126 IPL matches and has a strike rate of 142.39. Warner has registered 4 IPL centuries and 44 half-centuries in his name. The left-handed batsman has been on top for Australia in all three game formats.