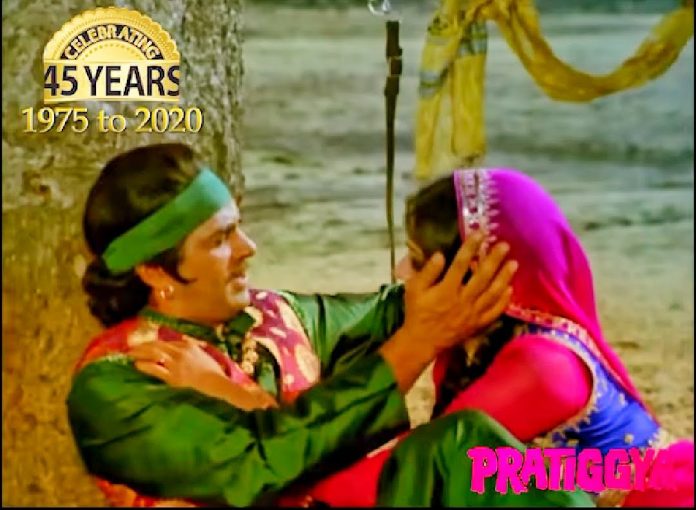 Dharam Singh Deol is an Indian film actor, producer, and politician who is well known for his work in Indian cinema. He is also known as the “He-Man” of Indian cinema. Among fans and his loved ones, he is famous by the names Dharmendra and Dharam Paji. He is considered one of the most successful actors in the history of Indian cinema.

Today the senior actor Dharmendra celebrates 45 years of his movie-Pratiggya. It is a 1975 Indian Hindi-language action comedy film which was produced by Dharmendra and B.S. Deol and directed by Dulal Guha. The film starred Dharmendra, Hema Malini, Ajit, Jagdeep, Mukri, Johnny Walker, Mehar Mittal and Keshto Mukherjee. In the film, the music was given by the legends Lakshmikant and Pyarelal and the lyricist was Anand Bakshi.

As celebrating 45 years of the movie Pratigya, the legendary actor posted two hilarious scenes and one video-song from his movie on his Instagram account. The first scene that he posted shows that Dharmendra tricks the local goons and the scene turns to be extremely amusing. His acting left the viewers amazed. He captioned his post as “Comedy is difficult…but…it goes well with me 🙏”

The other scene that he posted portrays a tinch of comedy-romance where the leading actor-Dharmendra and the actress- Hema Malini are indulged in comic arguments and ultimately the actress wins the argument. He addresses the post to the audience and so captioned it as, “Hope you will like it…….”

Finally, Dharmendra post’s a video-song as celebrating 45 years of the movie. He posted a song which portrays the romance and bond between the actor and actress. In the caption, he writes few lyrics of the song, “Mirza, mard aashiq…jiska Naam Sahibaan se pahle Liya Jata hai. Warna, Heer Ranjha…Laila Majnu…tarteeb kuchh Yoon ho jaati hai….”

All these posts of Pratigya movie that he posted have a logo on the left corner which says, “Celebrating 45 years 1975 to 2020”