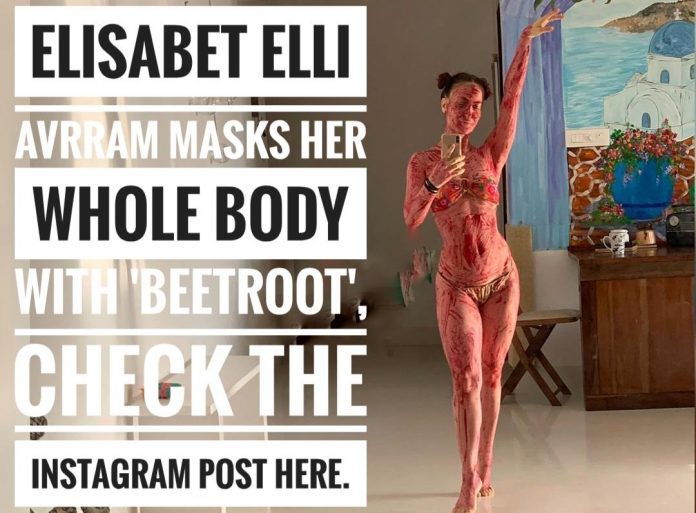 The current nationwide lockdown has barred people from going out of their houses and has prevented them from going about their lives as they did usually. That also means that they’re turning to homemade versions of skincare and haircare masks and such.

Swedish origin Bollywood actress, Elisabet Elli AvrRam has been quite active on her social media recently and has been posting throwback pictures and videos to connect better with her fans and followers.

Recently, the Inside Edge actress took to Instagram and posted a few pictures of herself entirely covered in beetroot juice. Her skin seemed red from all the beetroot juice on it.

Along with the pictures she wrote, “BEETROOT KI DUKAN🤣

For the love of beetroot…

Usha’s (my girl at home) idea…Mam Pura body mein late hai!👀……So we started with the face and later on said what the heck let’s put it all over!!!🤪🤣 Later on, she called me an Alien👽…I like that she’s ‘aware’ lolol👀”

People in her comments seemed to be very amused by her antics. When one of her followers asked about the results of her ‘experiment’, she told them that her skin was super smooth after doing that.

Ellie was last seen in ‘Malang’. The film is directed by Mohit Suri, while the film had Aditya Roy Kapoor, Kunal Khemu, Disha Patani and Anil Kapoor in the lead roles.