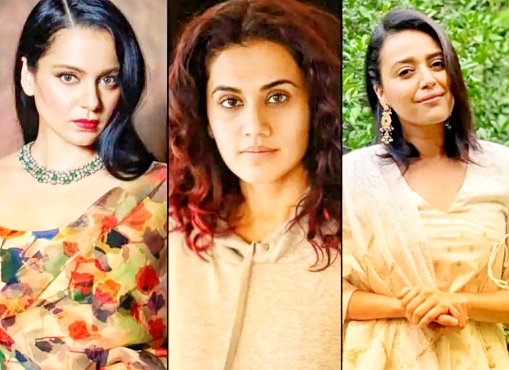 After the demise of Sushant Singh Rajput , the topic of nepotism got sparked. Netizens are claiming star kids and celebs like Alia Bhatt, Sonam Kapoor, Arjun Kapoor, who made him feel like he is not getting from the industry what he actually deserves.

A few days ago in an interview, Kangana Ranaut exposed the movie mafia and nepotism in Bollywood. She also remarked about Taapsee Pannu and Swara Bhaskar and also called them B grade actors. In addition to it, she said “if you love Karan Johar then why are you a B
grade actress?. Why are you not rising your position besides being bootlickers?

Whereas Swara takes Kangana’s remark as a compliment. She wrote”needy outsiders B grade actress But…. Better looking and better than Alia Bhatt and Ananya. Now I think this was a compliment Thanks, Kangana! I think u are gorgeous, generous u a great one !”

After all these, in an interview with The Times of India, she offered more explanation to her prior remarks on Taapsee and Swara. She said “so I want them to know. when Swara says she is a good friend of Sonam Kapoor that’s not how the world perceives her. No matter how
much Taapsee says that everyone loves her. People do not perceive her as somebody who is equal to as Alia Bhatt or Ananya Pandey .”
She added her own experience in Bollywood to make her statement more clarified.

“I have already gone through all those galis and know where it goes. I have faced the B grade actress tag in my career. I went through this phase. I straightened my hair. I stuffed my lips with botox. I wore a bikini. Perform in movies like rascals. I wanted to do desperately accepted. I wanted to win awards. I wanted to be on the cover page of magazines. And after doing all these things I was still a B grade actress. Nowadays Kangana is in headlines because of her bold step towards nepotism in Bollywood.