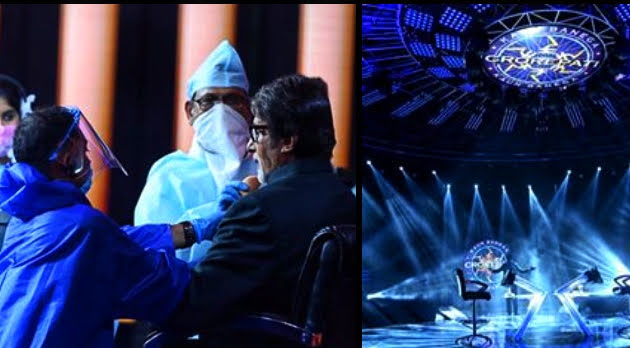 Amitabh Bachchan’s popular show Kaun Banega Crorepati is going to start again. Promos of the show have already been released, now photos of the set have also been shared on social media. It is being told that this time the set of KBC will be completely different and unique. The audience is ready to give a completely new experience.

Recently Amitabh Bachchan shared a photo from the set in which he is getting some touch up from spot boy. We can see that everyone is following safety precautions. We can see masks, face shield, gloves also the PPE kit that spot boy is wearing. He captioned the picture as “be safe….be in precaution….work continues as must it should”.

By the way, Amitabh Bachchan is also very excited about this season of KBC. He has expressed his happiness on social media. Sometimes he is sharing promos of the show, sometimes they are sharing many photos from their own sets. Now, because the actor himself has won the battle with Corona, in such a situation, this return is also important for him. He is then seen ready to entertain the audience. It is known that this time the theme of KBC has been inspired by Corona and Lockdown. It is being told through the promos of the show that every setback has a comeback. With this new theme, the audience has released quite quickly and all are waiting for the show to start.

It has been told through social media that the shooting KBC has started from 7 September. Now before the shooting, the makers worshipped on the set. It is a big deal to start such a big show in the Corona era. In such a situation, the makers have remembered God and prayed to him before this big challenge. Pooja’s photos have been shared on social media. Talking about the new set of KBC, it looks quite big and beautiful. The brightness of the set has increased significantly in blue lights.

KBC 12: Amitabh Bachchan is all set to make his comeback, expresses gratitude