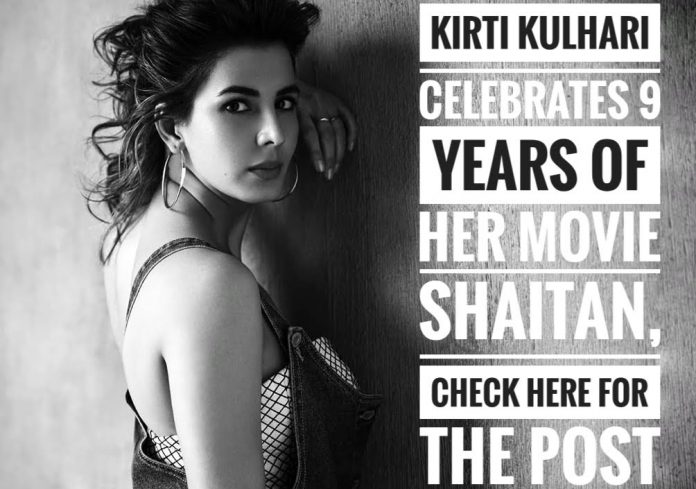 Indian actress and model Kirti Kulhari made her debut in Bollywood from Khichdi:- The movie, in 2010 and got her breakthrough role in
Bejoy Nambiar’s Shaitan in 2011. Kulhari was born and brought up in Mumbai, Kirti Kulhari did her post-graduation in journalism and mass
communication, she started her carrier with theatre and t.v. commercials.

After Shaitan, she appeared in successful films including Pink (2016), Uri: The Surgical Strike (2019) and Mission Mangal (2019). The latter two rank among the highest-grossing Bollywood films. Today she is celebrating 9 years of her breakthrough movie Shaitan, she shared a picture on Instagram with her co-stars of Shaitan and added a caption to the picture “ And this film, Shaitan released on this day 10 June 2011 such a special film for everyone who was part of it”

And she mentioned her costars with the caption loads of love to all u Shaitans. Starring of the film was Rajeev Khandelwal, Kalki
Koechlin, Gulshan Devaiya, Shiv Pandit, Neil Bhoopalam, Kirti Kulhari, Rajit Kapoor, Pawan Malhotra and Rajkummar Rao. Being an outsider in industry She said that struggle is to get just one chance to showcase their talent, unlike stars kids.

The fight for outsiders is not about ‘oh we are so good’. The fight is more about ‘give me a chance to show you what I can do’,” Kirti told
PTI. The actress will be next seen with Kay Kay Menon in her upcoming period-thriller “San Pachhatar 75”.