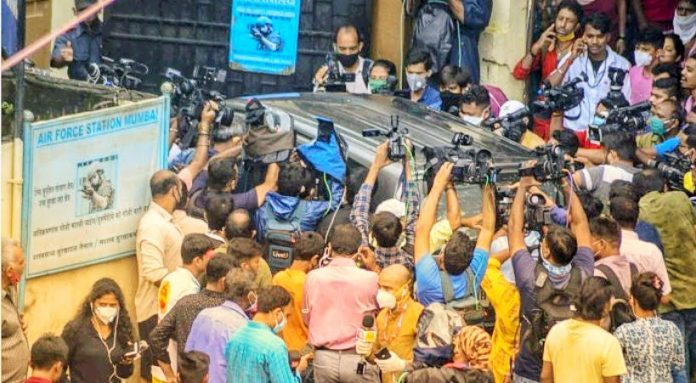 “If Indian Journalism goes any lower, they will hit oil.” Was the caption in Kirti Sanon and Malika Arora’s story that drew the heads of a lot of people.

Considering the immense pressure and fiasco associated with the arrest of Rhea Chakraborty, we have the one and only Indian Journalism to congratulate; for the amount of pressure brought about on her and her family.

Despite Rhea’s parents being retired Army Officers, the media has put them in the most grotesquely uncomfortable position. She and her entire family were put on trial by the media to be judged by the entire nation. In spite of having more pressing issues like the falling economy or the Corona Virus, they choose to harass a 27-year-old female.

On days the three days, Rhea Chakraborty was questioned by the NCB, the live feed began outside her home at 9 am and continues till 11 pm. Tracking her every move, Rhea used this in her favour when she wore a shirt saying, “Roses are Red, Violets are Blue. Let’s smash Patriarchy, Me and You.”

What’s atrocious is that when other Bollywood actors, Salman Khan or Sanjay Dutt had more serious charges against them, the media stirred very far away from them. This has stirred many controversies once again reminding us about the inequality in the Bollywood industry.

It is indeed well said that the new lows reached by the Indian Media are well wnough to hit oil.

Rakul Preet is kickstarting her morning with Meditation, check here for the post

Taapsee Pannu is enjoying the best view from the top, check here for actress’s post